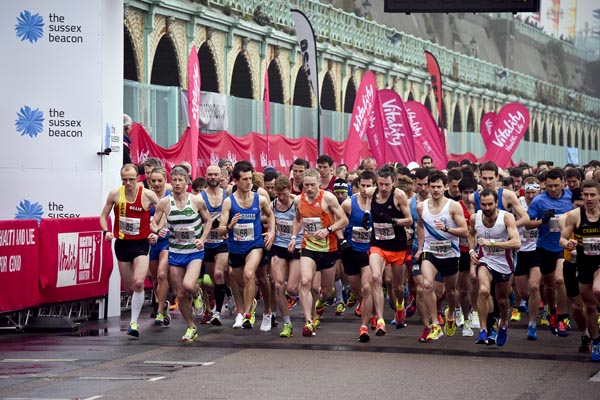 Last week campaigner Adam Betteridge made a last-minute decision to run the Brighton Half Marathon.

Adam who has been coordinating the online petition to Save the Sussex Beacon had not intend to run the race this year.

He said: “I’ve run the race before, but I wasn’t going to do it this year as I had not been training nearly enough this season.  I tried a 7 mile run the Sunday before which was quite frankly agonising.

Then friends from Bear-Patrol runners group said they’d run with me and suggested we do it in mixed up stages of running and walking. They gave me some encouragement which got me thinking. We’d be slow but we’d most likely make it around.

This then also got me thinking about how it could be a great opportunity to raise awareness about the #SaveTheSussexBeacon petition and campaign I’d been involved with.”

The Sussex Beacon itself had recently announced a campaign aiming to raise £50,000 from private donations over the coming weeks, so Adam hoped he might be able to raise some funds for that as well as raising awareness about the Beacon’s financial situation following NHS cutbacks.

It was also a perfect opportunity to help raise awareness of his friend Pablo Fernández-Arias, who committed suicide just this Christmas after experiencing complex and challenging health issues related to his HIV status. Adam and Pablo both sang together as members of Brighton’s Gay Men’s Chorus.

Adam continued: “He was a lovely man, and a fantastic soloist, so I made the decision to run, set up a JustGiving page, and announced to the world via social media “I’m going to do it!”

Adam set his initial fundraising target at £400, but was stunned that within a matter of days he had smashed through that and within a week people had donated nearly £4,500 – and that’s before Gift Aid is added.

One person even made a single donation £1,000 which Adam says left him, “humbled and somewhat emotional”. There was certainly no turning back!

Despite the day of the race being cold, wet and windy, Adam’s spirits were lifted when just before the race Norman Cook (aka DJ Fatboy Slim) and Peter Kyle the Labour MP for Hove and Portslade both signed the petition and offered their support to his campaign.

A group of volunteers including Eldur, Freddie, Paul and Ian, were on hand to collect signatures adding several hundred new names to the petition.

The Sussex Beacon are aiming to raise £50,000 from private donations over the coming weeks, so please do give as generously as you are able too. It all helps!