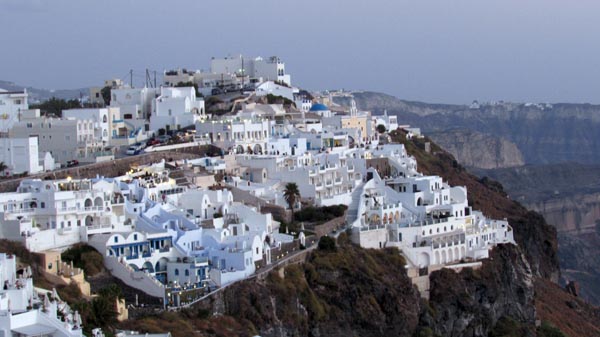 Santorini, a mythical name with associations of Atlantis and ancient Greek legends, is the rim of a dormant volcano which blew up roughly 3,500 years ago, causing the entire centre of the island to sink into the sea.

Santorini’s main business is tourism with over 800 hotels, most of which claim to be at least four star and charge accordingly. Today, over 3 million tourists a year from all over the world, half of which arrive on cruise liners, spend a few hours buying tourist tat, gaze at the over hyped sunset and then get back to the ship.  There are only 10,000 permanent inhabitants living on the island which doubles during the high season, with young Athenian workers.

It is undoubtedly a stunningly beautiful place, mainly because of the caldera, the cone of the volcano which flooded when it collapsed.  All volcanoes have a caldera but the Greeks seem to have hijacked the word specifically for Santorini.  This particular caldera is the largest on earth, the water is 380m deep and it is spectacularly blue.

Most of the hotels on the caldera cascade down the cliff, which means a lot of steps; without doubt the hotels are extremely luxurious and, of course, ensure spectacular views.  We checked into the IRA Hotel in Firostefani which is about 15 minutes walk from the main town Thira, which is also the official name of the island.  This can make things a bit tricky when checking in at Gatwick as the destination boards will sometimes just state Thira, with Santorini in very small letters.

The narrow streets of Firostefani are full of bars, restaurants and shops. The whole area is thronged with hundreds of selfie taking visitors.

The IRA hotel is quite stunning; the rooms are luxurious but watch out for those steps, we had no less than 17 down to the bathroom, risky in the middle of the night. The service was immaculate and the food terrific, meals are served wherever you wish, on your own balcony, by the pool or on one of the many terraces.

Most rooms have spacious balconies with a view which is always interesting, watching the cruise ships sail in and out of the lagoon and of course that sunset.  We paid £200.00 a night which included an excellent breakfast, not bad value for money.  You can pay a lot more at some of the more swanky places favoured by our friends from the Far East and the US.

This side of the island is very excited by ‘the sunset’. All the restaurants, cafes, bars and hotels shout about their sunset view and yes it is spectacular but the best in the world? Maybe not, a sunset is just that, we could not see what all the fuss was about, but it is certainly beautiful and worth seeing.

If you want to see the island you really need a car and at 35€ a day not expensive.  There aren’t that many roads, the traffic is challenging but no worse than anywhere else. The main problem is the idiot tourists on the 4×4 quad bikes, which cost the same to hire as cars.  They are a curse throughout the Mediterranean; you should avoid driving at night, when they can be a real threat to safety.

You can spend a fortune with some of the many sailing and diving companies that are everywhere, water sports and sailing is the big thing, but very expensive.

Santorini is a ‘buy one get one free’ destination as the opposite side of the island is a totally different experience. It’s quiet, calm and scenic, being the part that wasn’t affected by the eruption.

There are some lovely beaches, at least one is nude and partially gay, many very pretty little villages and best of all, fewer tourists.

The contrast between the two sides is dramatic.  We had a guide, Adonis (but they aren’t they all Adonis) who drove us down this side of the island. He took us to the ancient city of Akrotiri a 4,000 year old Minoan town that was covered in volcanic ash which has allowed it to be amazingly preserved, they have constructed a fantastic museum right over the huge site, well worth the 5€ entrance fee.  In many ways it is similar to the ruins of Pompeii.

The beaches are quite small but attractive. The main industry if you can call it that, is wine and tomatoes.  Volcanic soil produces fantastic tomatoes and grapes but it would produce many other vegetables but the population has grown somewhat lazy relying on tourism to provide a living.

easyJet flies from Gatwick during the summer, we went in September which is the perfect time to go, the flights cost about £350 return.

Would we go back, probably not, it’s one of those destinations that you really should see – once.