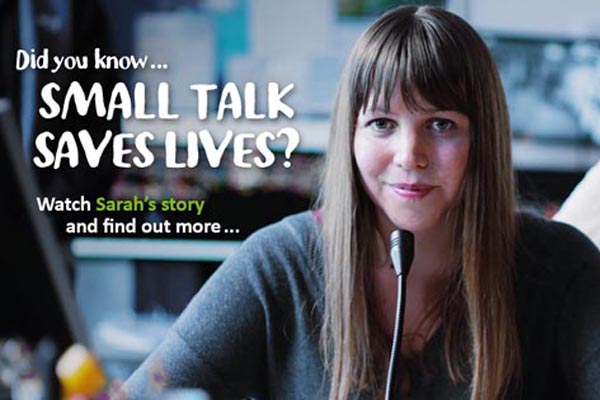 Campaign encourages the public to prevent suicide on the railways.

Samaritans is launching a campaign in partnership with British Transport Police, Network Rail and the wider rail industry to give travellers the confidence to trust their instincts and act if they notice someone who may be at risk of suicide in or around a train station.

By highlighting that suicidal thoughts can be temporary and interrupted with something as simple as a question, the campaign aims to give the public the tools to spot a potentially vulnerable person, start a conversation with them, and let them know support is available, including contacting Samaritans.

Small Talk Saves Lives has been developed after research showed passengers have a key role to play in suicide prevention. Further research showed the majority are willing to act, but many wanted reassurance they wouldn’t “make things worse”.

The campaign draws on insights from successful interventions made by rail staff who’ve been trained by Samaritans in suicide prevention. For each life lost, six are saved and the hope is to get more people involved.

A survey of people who travel by train, carried out for the campaign, revealed more than 4 out of 5 would approach someone who may be suicidal if they knew:

Nearly 9 out of 10 thought a person in need of support would find it hard to ask for help.

The emphasis is on responding in ways people feel comfortable and safe with. Different courses of action are suggested, depending on the situation and the response. They range from approaching the person and asking them a question, to involving other passengers, alerting a member of rail staff or calling the police.

Sarah Wilson felt suicidal and planned to take her life on the railways, but didn’t. Her story inspired a video to promote the campaign, where unsuspecting passengers on a train platform initially think a station announcer is warning them of delays due to a suicide on the line, only to find out that they are listening to a story of hope and recovery, told by Sarah herself.

Sarah said: “Someone showing that they cared about me helped to interrupt my suicidal thoughts and that gave them time to subside. The more that people understand that suicide is preventable, the better. I hope people will share the video and that the campaign will encourage people to trust their gut instincts and start a conversation if they think someone could need help. You won’t make things worse, and you could save a life.”

The campaign was also developed in consultation with people who have been personally affected by suicide, including where a loved one has taken their life on the railways.

Branch Publicity Officer Henry Smith, said: “Suicide is everybody’s business and any one of us could have an opportunity to save a life. The knowledge and skills to save lives in the rail environment can be applied to many other situations. We hope that Small Talk Saves Lives is the start of a much wider conversation about how suicide is preventable.”

For more information about Small talk Save Lives, click here: