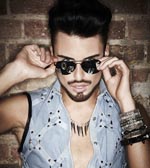 X Factor finalist, Rylan is the latest addition to the line-up of artists performing at As One In The Park 2013, a new LGBT festival for London, to be held in Victoria Park, Hackney on Bank Holiday Sunday, May 26.

As One In The Park a joint production between Orange Nation and Saturn Star is the the first large-scale gay festival in London for over a decade, putting the capital in line with other major European cities including Barcelona and Madrid. Victoria Park is firmly established as a prime festival site, and plays host to events including Field Day.

BRIT nominee Rita Ora has been announced as the first headline artist for the main stage at London’s new LGBT Festival. She will be performing the three No. 1 hits from her No.1 Album; Hot Right Now, R.I.P., How We Do (Party) and others including her new single Radioactive.

As One In The Park will feature four large indoor arenas and five additional stages, which will be hosted by some of the world’s leading gay party brands. The Circuit Arena will be presented by international circuit parties, Matinee, WE Party and The Week, while the Best Of British Arena will be hosted by Beyond, Orange, and Salvation.

A limited number of exclusive VIP Tickets are available for the event.

“As the UK’s premier gay clubbing group, we felt it was time that London was no longer overlooked when it came to a major gay outdoor entertainment event. Over a year in the planning we transform one of our most successful club brands the legendary As One  into a massive outdoor event on one of London’s most loved festival sites, Victoria Park. Orange Nation bringing together the cream of London’s gay scene alongside the world’s most internationally renowned gay brands, coupled together with some of the world’s biggest stars. We bring you “AS ONE IN THE PARK”!

The Orange Nation is the UK’s largest gay promotions company, a collective of LGBT club promoters who operate large internationally renowned parties including Beyond, We Party and Matinee in venues across London including Electric Brixton and The Coronet Theatre. They also own South London based nightclub venues Fire, The Lightbox, Area, Protocol and Covert.

Orange Nation has a strong history within the LGBT London community as the leading nightlife promotions group and has represented London’s dance scene at events including London Pride (host of the Soho Square Dance Stage) and internationally at events including Barcelona Circuit Festival and at cities including Paris, Ibiza and Rome.