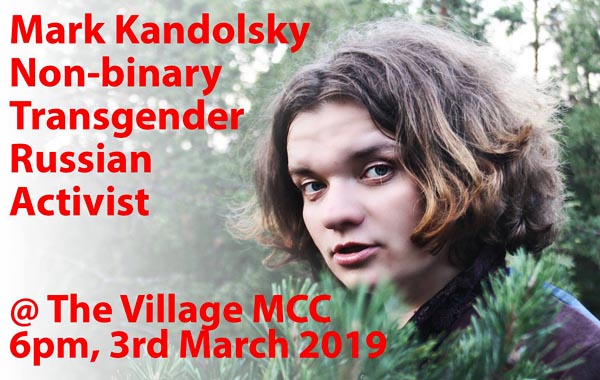 Mark Kandolsky, a non-binary transgender activist from Saint Petersburg, Russia will speak on Sunday, March 3 at the Village MCC in Kemptown from 6pm.

MARK has been working as an activist since 2015, as long as they’ve been open about their identity, having experience both in advocacy and community building, though mostly focusing on the latter.
Mark was raised in an atheistic family, and at the age of 18 decided to join the Roman Catholic Church, where he was baptised a year later. Roman Catholics in Russia are much more liberal than the Russian Orthodox Church, and it seemed like a good choice at the time. Even before they were baptised Mark met their current partner, also transgender, at the church. Unfortunately, they had to leave the Church several years later. However, Mark still identifies as Catholic.
Mark has met many LGBT+ people in Russia who suffered in the Church and were not accepted there and one of their friends who could not reconcile their faith and sexual orientation committed suicide. It affected Mark so deeply, that after a year of depression they started to work as an activist trying to improve the life of their LGBT+ siblings who also suffered from religious violence.
Currently, Mark coordinates a small LGBT+ religious community. They are a diverse group, and among them are people of different religious traditions, sexual orientations, and gender identities.
Mark’s activism is a calling and ministry, be it in the religious sphere or not: apart from Nuntiare et Recreare (their group), Mark also works as an activist for the transgender communities: leading support groups, providing peer-to-peer consultations, translating, editing, and publishing materials for the transgender communities and their allies.
Mark says; “My greatest dream is to open a shelter for the LGBT+ communities. It is only a dream now since we need much more resources to open it, and we’ve had a lot of legal obstacles. I hope and pray that one day this situation will change and we will be able to provide shelter, food, and education to those who need it most.”
Rev. Michael, Senior Pastor at the Village MCC added; “I am very excited to hear Mark speak at our service.  MCC has been actively involved in supporting the LGBT communities in Russia so we are well aware of the unwelcoming and even dangerous environment they are in.  There are no welcoming churches in Russia. I look forward to hearing this first-hand experience and finding out how we can support this important ministry.”
For more information, click here:
The Village MCC is a church created by LGBT+ Christians, their families, friends, and allies. It’s an MCC (Metropolitan Community Church) called to support the LGBT+ communities in whatever ways it can. They offer a safe space where anyone can feel at home, fully affirmed in their sexuality and gender identity. Church members are active in the wider community, offering emergency aid and support to the homeless and vulnerably housed.
Their minister, Rev. Michael, offers spiritual direction and pastoral care. They worship together every Sunday evening at 6 pm at the Somerset Day Centre.
Everyone is welcome to go along and experience for themselves the inclusive spirit of The Village MCC.