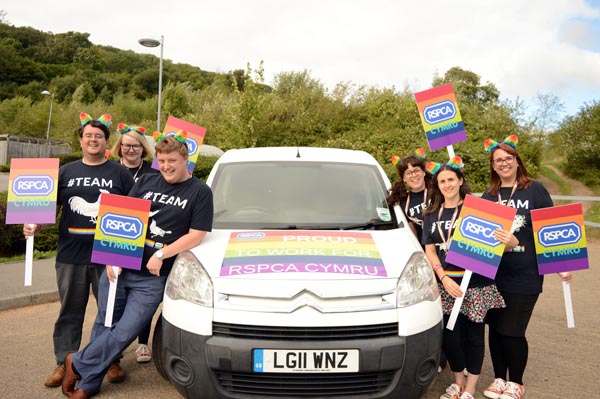 RSPCA inspectorate officers will join Cardiff’s annual Pride parade for the first time, as the charity prepares for its ‘biggest, best and most brilliant’ presence at the festival.

OFFICERS – including wildlife casualty volunteers, animal collection officers, inspectors, and the RSPCA’s superintendent for Wales – will take to the streets of Cardiff for the parade on Saturday, August 25.

Staff from across the organisation will march, with involvement in the parade forming a core part of RSPCA’s wide-ranging involvement in 2018 Pride Cymru, including the re-launch of limited edition t-shirts, an animal welfare stand, and a social media makeover.

Martyn Hubbard, RSPCA superintendent for Wales, said: “It is so important that we aspire for, and celebrate, a diverse RSPCA inspectorate, where everyone is treated with dignity and respect.

“I will be immensely proud to join frontline officers, and staff from across the RSPCA, in marching in the Cardiff Pride parade for the first time.

“A unique RSPCA van – including our iconic lozenge logo with a rainbow backdrop – will drive alongside RSPCA staff. This is an important statement of how we are not only an animal welfare charity, but an organisation who deal with thousands of members of the public every single day – and treat them all the same, regardless of their sexual orientation.

“The RSPCA must always strive to be understanding, inclusive, and a bastion for diversity and fairness.”

RSPCA Cymru will again have a stand inside Pride Cymru’s Big Weekend event where festival goers can discuss animal welfare, and show their support for the RSPCA with a series of goodies and giveaways up for grabs.

Limited edition t-shirts will be available to buy – raising vital funds for the RSPCA’s animal welfare work. These t-shirts – £10 each – are themed with animals which have positive connotations within the lesbian, gay, bisexual and transgender community – including cockerills, pussy cats, blue tits and bears.

The term ‘bear’ is used as one of the many identities within the LGBT+ communities – and this is one of a series of t-shirts giving people the chance to celebrate their identity, and passion for animals.

Those signing-up to the RSPCA’s campaigns newsletter, or social media channels, can also grab a free pair of rainbow cat ears – which are sure to add additional colour and fun to proceedings. Special RSPCA rainbow lanyards and wristbands will also be available.

Matt Lissack, DJ and RSPCA celebrity supporter, will be wearing an RSPCA Cymru t-shirt featuring a cockerill, while taking control of the decks at a Pride event on Friday evening.

He said: “These unique t-shirts are fantastic. They’re an amazing way for Pride Cymru attendees to show their support for animal welfare, and the LGBT+ communities at the same time. I can’t wait to DJ on Friday sporting a team cockerill shirt!

“These t-shirts will look particularly good with rainbow cat ears and wristbands which people can get their hands on from the RSPCA stand at Pride!

“Pride Cymru is an inspirational and ever-growing event, and I’m delighted that RSPCA Cymru – a charity I have worked closely with for many years – will have their biggest ever presence at the event, including frontline officers marching in the parade.”

RSPCA Cymru’s social media channels have had a makeover ahead of the event, with the society’s historic and iconic lozenge positioned onto a rainbow flag background on Facebook, Twitter and Instagram.