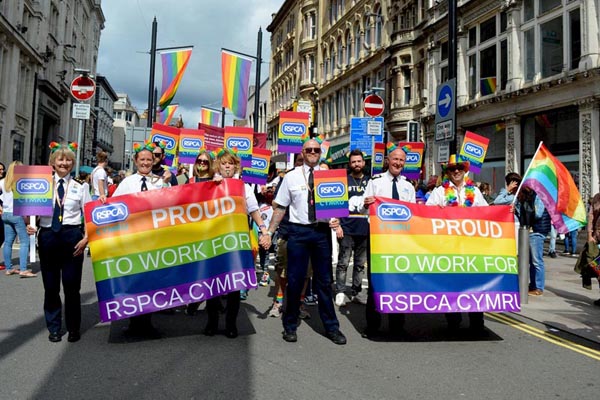 RSPCA Cymru will march at this weekend’s Pride Cymru in a show of strength against intolerance – while highlighting the prejudice four types of dogs still face under discriminatory UK law.

THE animal welfare charity will be marching in the eagerly-anticipated Parade, and discussing animal welfare with attendees at a dedicated RSPCA stand at the Big Weekend event in Cardiff.

RSPCA inspectors will join countless other organisations in the Parade, with the charity highlighting the importance of striving to be an inclusive, understanding organisation. However, the discrimination faced by some of human’s four-legged friends will also come under the spotlight on the weekend, as breed-specific legislation (BSL) marks 28 years of judging so-called ‘dangerous’ types of dog based solely on their looks.

BSL has been in force in England and Wales since August 1991, and bans the ownership of four different types of dogs traditionally bred for fighting, namely the pit bull terrier, Japanese Tosa, Dogo Argentino and Fila Braziliero.

There is no robust research or evidence to demonstrate that these breeds or types are any more aggressive than other dogs. Despite this, many dogs found to be of a banned ‘type’ are euthanised, solely because of the way they look.

At Cymru Pride – a celebration of diversity, respect and inclusion – RSPCA Cymru is urging the public to support an end to the suffering and unjust destruction of dogs simply because of their appearance – and to join them in calling on decision-makers to #EndBSL.

Shelley Phillips, RSPCA Cymru campaigns manager, said: “As RSPCA Cymru gears up for another Pride Cymru event, we look forward to marching in the Parade and chatting to everyone at Big Weekend in a united display of support against intolerance and discrimination in Wales.

“However, we’ll also be highlighting to attendees another form of discrimination alive and well in our society.

“For 28 years, BSL has seen dogs pay the ultimate price solely because of the way they look, despite a significant lack of evidence to prove these types of dogs pose greater risk, or are threatening to public safety.

“For us Pride Cymru is not only a great opportunity to celebrate diversity, and highlight the importance of the RSPCA being an inclusive, understanding organisation – but also to discuss how we can all work together to tackle another form of ugly discrimination. BSL continues to take innocent lives, letting down dogs simply because of the way they look.

“Whether or not a dog is aggressive can be influenced by factors such as how they are bred and reared and experiences throughout their life – but breed is not a good predictor of risk of aggression. That’s why we want to see these discriminatory laws binned once and for all, and Pride Cymru is a poignant forum to discuss this.”

To find out more about the RSPCA’s campaign to #EndBSL online, click here:

RSPCA Cymru will also be selling limited-edition t-shirts at Pride Cymru over the weekend (August 24 – 25), to raise funds for their animal welfare work. These t-shirts – £10 each – are themed with animals which have positive connotations within the lesbian, gay, bisexual and transgender community – including cockerels, pussy cats, blue tits and bears.

‘Bear’ – for example – is used as one of the many identities within the LGBT+ communities – and is one of a series of t-shirts giving people the chance to celebrate their identity, and passion for the welfare of animals. Iconic rainbow ears are also on sale at the RSPCA stall at Big Weekend – priced at £2 each, while RSPCA Cymru’s social media pages have also been given a rainbow makeover in anticipation of the event.

Pride Cymru takes place tomorrow, August 24. The parade starts sets off from the Cardiff City Hall Lawns at 11am and will finishing at around 12:30. The entertainment takes place on Cardiff City Hall lawns and artists appearing on Saturday include Texas, Liberty X and Gok Wan. On Sunday 25, comedian Joel Dommett and Robert White will perform on the Glee Stage, while Honeyz and Atomic Kitten will play sets on the main stage.

For up to date information about Pride Cymru, click here: