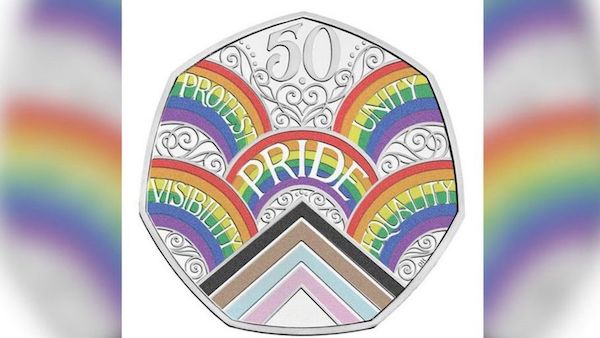 The Royal Mint has released plans for a rainbow 50p coin designed by LGBTQ+ artist, writer and activist Dominique Holmes to mark 50 years of the Pride movement in the UK.

Asad Shaykh, Pride in London’s director of marketing and communications, said: “It humbles me greatly that the words that I coined for the brand- protest, visibility, unity and equality – will be on an actual coin, opposite the Queen.”

Royal Mint has said that a donation will be made to London LGBT Community Pride as part of the launch.

Clare Maclennan, the Royal Mint’s director of commemorative coins, explained that the coin is to celebrate a huge milestone and will “capture the spirit of Pride UK”.

This is the first time the LGBTQ+ community has been celebrated on an official UK coin. It won’t go into circulation but will be available to buy online.