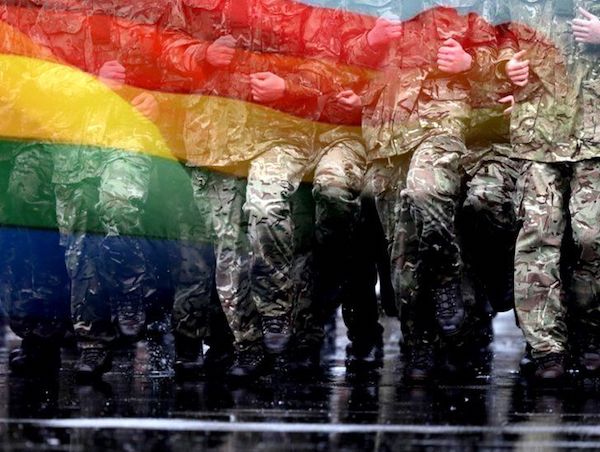 The Royal British Legion (RBL) has apologised for past ‘discrimination’ against the LGBTQ+ community and LGBTQ+ war veterans, winning ‘praise and thanks’ for its decision and its new commitment to LGBTQ+ inclusion.

Human rights campaigner Peter Tatchell wrote to the RBL criticising its past disparagement of LGBTQ+ veterans and of LGBTQ+ remembrance ceremonies and wreath layings at the Cenotaph during the 1970s, 1980s, 1990s and as recently as just over a decade ago.

The RBL had for many years denounced LGBTQ+ wreaths at the Cenotaph as ‘disgusting’ and ‘an insult to the war dead’. It allegedly ordered the wreaths to be removed and destroyed. Mr Tatchell deplored RBL’s past refusal to even reply to letters of concern written by the LGBTQ+ group OutRage! He urged the Legion to apologise.

Charles Byrne, RBL’s Director General, has now written to Mr Tatchell stating: “I am deeply saddened by your previous experience with the charity, and I can only apologise on RBL’s behalf for not responding and the discrimination shown at the time.

“RBL has very much changed as an organisation since your original correspondence with us… The behaviour you outline of the RBL of the past is not tolerated in today’s organisation. The corrective action of more recent years has led to an organisation where differences are celebrated…

“RBL has formed a positive relationship with Fighting with Pride, including the provision of a helpline to LGBT+ veterans, serving personal and their families…and support to LGBT+ veterans who were unfairly discharged and stripped of their medals prior to the ban being lifted in January 2000.”

“I would like to respectfully request that RBL make a public apology to LGBT+ veterans and the wider LGBT+ community for its actions in the past:

1. Refusing to acknowledge that LGBT+ people served in the armed forces and their sacrifice

2. Condemning LGBT+ wreath-laying at the Cenotaph
3. Opposition to LGBT+ veterans marching in the Remembrance Sunday parade
4. Using disparaging language about attempts to commemorate LGBT+ veterans, including the words and phrases: ‘bad taste’ and ‘making political capital’
5. Not responding to letters from myself and others when we wrote to the RBL express these concerns

“In the years prior to me writing that letter, the RBL described the laying of LGBT+ wreaths at the Cenotaph as ‘disgusting’ and an ‘insult to the war dead.’

“Until 1985, for two decades from the early 1970s, all LGBT+ wreaths were removed from the Cenotaph and destroyed. I was told at the time that this was at the request of RBL.

“I know and appreciate that the RBL has changed and moved on but I nevertheless hope that some form of apology can be made so we can draw a final and complete line under the past.”

Peter Tatchell responded to Charles Byrne’s letter, saying: “Our praise and thanks to the Legion for turning away from its homophobic past with this forthright and fulsome apology. We are delighted by its commitment to support LGBT+ veterans and work with the LGBT+ community.

“This draws a line under the pain of the RBL’s previous prejudice and discrimination. LGBT+ people can now confidently collaborate with the RBL, knowing that they are on our side.”