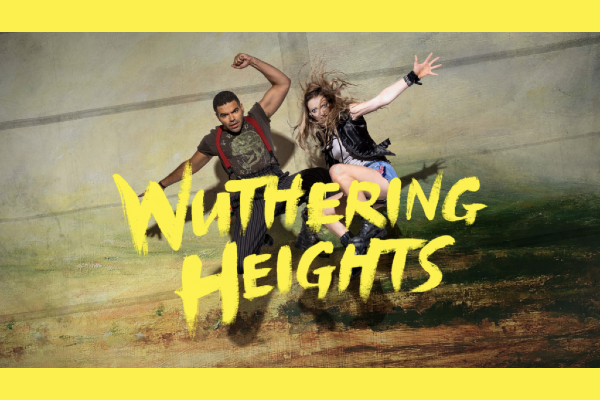 Emma Rice returns to Brighton Festival with her new company Wise Children with this wonderful production of Wuthering Heights. Set on the wild and windy Yorkshire Moors is tells an epic story of love, revenge and redemption. Rescued from the Liverpool docks as a child, Heathcliff is adopted by the Earnshaws and taken to live at Wuthering Heights. He finds a kindred spirit in Catherine and a fierce love ignites. When forced apart, a brutal chain of events is unleashed.

The singing in this production is astonishingly good, full bodied, passionate, gripping us in its emotional tension, throwing us up and holding us carefully in the depth of the lows,  Lucy McCormick  and Liam Tamne  lead the company their voices possessing and filling the spaces of the Theatre Royal and are excellent along with atmospheric background vocals and movements being provided by a trio of voices providing interesting reactive to the action unfolding before then.

The diverse cast give us a real insight into the different worlds of Brontës masterpiece  along with the use of puppets for younger kid characters  with different actors speaking, allowing a textured feel to the projection. It feels much ‘bigger’ than it is. The scene transitions are astonishingly slick and fluid, the whole set seems to shudder, heave and suddenly we’re elsewhere, elsewhen.  I’m a fan of a slick set, and the props and level of details bringing atmospheric touches to every moment of action on stage.  Doorways and windows being represented in writhing, turning portals, experiences from both sides, allowing for some fun physical acrobatics.

There are some bonkers abstract props, I adored the chairs on chairs on wheels, but even these abstract touches are given meaning and weave themselves into the whirligig of activity on the stage, the books on broomstick birds delighted me.

Director Rice gives us a cast in top form, who glide, sing, dance, jump, place and act with a refined grace which renders everything feeling natural and unfolding in front of us for the fist time. For those who are new to Bronte work, or know if through film or parody or Kate Bush the narrative can be a touch slow to speed up, but once the tension is building, it’s a pumping wheezing full-speed-ahead engine of narrative direction.  Time is flexible in this production allowing the stories of key characters to be explored in break out scenes which allow us to understand their actions later in their lives.

The dancing is on point and precise throughout, with the whole cast turning moments into delights and shining in their own ways, you often hear of a ‘toe tapping’ musical, Heights is that, with the whole row in the stalls alongside me tapping away with the dance number, the band members interweave their playing with interacting with the dancers, giving an authentic tavern or village fete feel to the action. It’s a real whirl of movement and music.

We are served a wonderful big dramatic ending to the first half which leaves the audience stunned and not quite sure if it is time to seek refreshments.

With most of the action taking place inside the houses from the books, Wuthering Heights being the most famous one, we are given a dark staging of old spaces. There are times when this can obscure some of  the action . The sound effects are good with big impacts, the storms of the moors being evocatively represented, with the winds and rains forcing themselves in when the doors were opened.

There’s some light audience participation, a lovely moment one of the case dancing and shimming along a row in the stalls, to the audiences’ delight. The same actress playing a rather eccentric character, the son little Linton became a real stand out character with weaving the audience into the action, gently picking on people and filling the space with bizarre movement.  Death is treated in an interesting way, a Dr walks on with a blackboard with the departed  named on, following on from the confusing plot explanations at the beginning, a rather fun poke at Bronte’s mass of interwoven characters.

It’s nice to see credit given to stage staff and production crew at the end of production and just highlights the cooperating and coproduced energy that this thrilling ensemble bring to the theatre.

If you’ve not seen Emily Brontë’s masterpiece on stage, then witness it here transformed into a powerful, uniquely theatrical and musical experience, with Rice’s trademark playfulness and attention to detail.  This is a brilliant performance of precise choreography, full on show tune celebrations , some reflective moments of defined melancholia, a set that thrills and rich colorful Victoriana and African influenced  costumes. This spicy melange of talents are all drawn together by Rice’s direction allowing you to sit back, allow your attention to be enthralled and royally entertained.