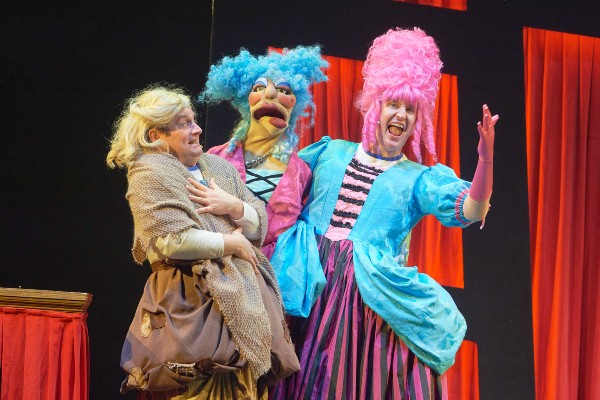 Christmas audiences seeking fun should look no further than Potted Panto, which delivers 7 of our favourites at breakneck speed in just 70 minutes.

Gary Trainor and Daniel Clarkson hurtle through the best-loved stories with their own crazy twists and turns. For the most part Gary is the sensible narrator anxious to keep the panto tradition alive. By contrast, Dan is the daft rebel, equally determined to sabotage Gary’s activities.

So we get a French fairy Godchicken, with not a wand but a “ baguette magique”, and we’re offered 4 Prince Charmings -all played by Dan- as well as King Rat, Tom the Cat, the back end only of a cow, a moose instead of a goose, and we even end with a mash-up of Aladdin and A Christmas Carol, with the originally named Abanazar Scrooge!

The duo pokes fun at the idiocies of Panto rituals, like “ oh yes he is; oh no he isn’t”, and “ he’s behind you”. It’s all good clean fun with little innuendos like references to the Royal heir’s marvellous dances: “ the prince has great balls”.

Audience participation is to be expected and delivered, including a 3-D simulation of Cinderella’s frantic midnight coach ride. When a small audience member in an Arsenal top is asked how Abanazar should die, he pipes up: “by being impaled with a knife through his digestive system”. I’m not making it up, folks. Along the way there are lots of Covid jokes, and even more Boris, Number 10 and Christmas party ones and even a side-swipe at a wayward Prince – I guess you have a choice of two.

Director Richard Hurst keeps the pace frantic, the jokes overlapping, and we even get snowed on from a great height in the front stalls.

Potted Panto is at the Garrick Theatre, London on selected dates until 9 January.  Oh yes, it is!

Tickets are available at nimaxtheatres.com