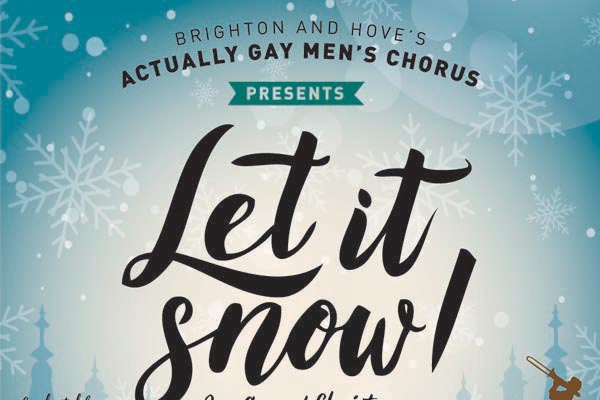 The marvellous fact about the LGBT+ choirs in Brighton and Hove, is that they are all unique and bring special elements of their own to each of their concerts.

Some are community based, some are theatrical, others are mixed sex, gospel based, pop influenced or just simply people coming together to enjoy the physical and emotional joy of singing.

What Actually Gay Men’s Chorus at St Andrews Church on Friday, December 22 brought to the equation, was a fairly small group of dedicated men performing a simple but heartfelt concert programme that relied on its content and details for our enjoyment.

Dressed smartly in white tie and dress shirts with their musical director Samuel Cousins resplendent in tails, they delivered a mixture of Christmas songs and carols with an air of confidence and enjoyment.

There is for me, still a little way to go to relax and loosen up some of the members of the chorus, for them to feel in the words of the last song of Act 1…to be free to Let it go, but the improvements I have seen over the four or five years I have attended their concerts is vast.

I don’t think audiences realise how frightening it is to actually (excuse the pun) perform in front of friends, family and strangers after weeks or months of rehearsing with only themselves as the critics.

Gerry McCrudden made an excellent host, funny and informative with a great deal of Irish charm.

He was joined by the solid but sensitive accompaniment of Simon Gray on the piano.

A lovely addition to the evening was the programming of Harvey’s Brass Ensemble consisting of Neal Bland and Steve Morris on trumpets, Peter Cowlett on trombone and Phil Barber on tuba.

We, the audience, were invited to join in four of the Christmas carols and the mix of the other items ranged from classical to traditional without too many modern songs to break the evenings ‘traditional’ approach.

Particular chorus favourites were Bethlehem with an arrangment by Simon Gray and The Vaults of Heaven and Torches, both arranged by Jason Pimblett.

The soloists did themselves proud as usual and it was good to see some new faces taking the solo spots.

Another meaningful addition was the addition of two poems written and performed by probably the youngest members of the chorus, Jack Lynn and Chris Cage.

They were very moving and certainly had my companion in tears.

The charities being supported on the evening were Inclusion for All and The Sussex Beacon. To encourage us to dig deep, huge amounts of mince pies were served before, during and after the show.

Lastly, there was a very generous hamper complete with a £25 Waitrose voucher as the single raffle prize.

As it was my birthday, I was invited to draw the raffle and, to everyone’s delight, it was won by Patron and staunch supporter of both the choir and the Sussex Beacon, Mr David Raven AKA Maisie Trollette, a fitting end to a very successful evening of music making.

The next Actually Gay Men’s Chorus show, Ovation will be at St Andrews Church on Saturday, April, 21 at 7.30pm

Let it Snow with the Brighton and Hove Actually Gay Men’s Chorus was performed at St Andrew’s Chorus, Hove on Friday, December 22, 2017.