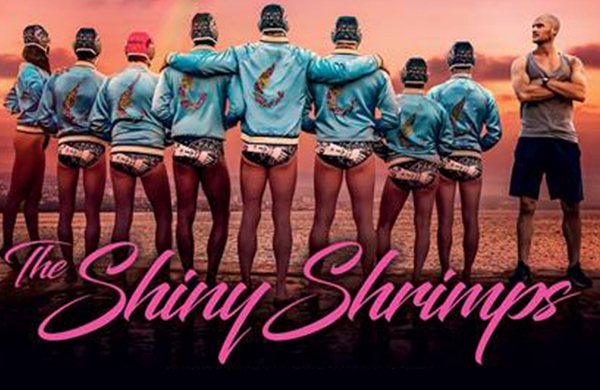 Matthias le Goff is a highly  motivated French Olympic swimmer who is struggling to be quick enough to qualify for  his most important race ever. An inopportune homophobic remark in a tv interview gets him suspended, with a delicious twist of a punishment.

He must help train the worst gay sports team in the world, the wonderfully rainbow-coloured Crevettes – the French water polo contenders who hope to get to the Gay Games in Croatia.

Initially it doesn’t  go well – Matthias regards the men plus one trans woman as “ retards “. What writers and  directors Cedric le Gallo and Maxime Govare manage to achieve is a clever balance of camp humour, serious LGBTQ+ issues and  a heart-warming if tragic  story.

Nicolas Gob is a mean and moody Matthias – uncannily a look-alike for Man City manager Pep Guardiola – who like all good anti-heroes comes good in the end.

The filming of the various training sessions and water polo games is a blend of action above and below water and Carry On physical antics and it’s a blend that works remarkably well.

Described on Wiki as “ a French sports comedy film “ it owes a great deal to Priscilla Queen of the Desert – there’s even a road trip- on a hijacked open-top tourist bus from Paris to Croatia – complete with songs and happiness  much like the drag queen cinema and stage hit.

Romain Brau is the main source of humour as Fred – the former male team member who returns having transitioned and he plays the part with obvious enjoyment.

The film has a series of sub-plots that add to its depth with the usual themes of deceit, guilt, homophobia and true love , and though it has a tragic denouement, the finale is an uplifting dance routine around a coffin believe it or not.

It’s terrific that mainstream Universal has made this film for general cinema release and it’s another hit for the brilliant LGBTQ+ film distributors Peccadillo Pictures – now based on our doorstep in Hastings .

The Shiny Shrimps is in cinemas now  – it’s a wonderful film : see it if you can.