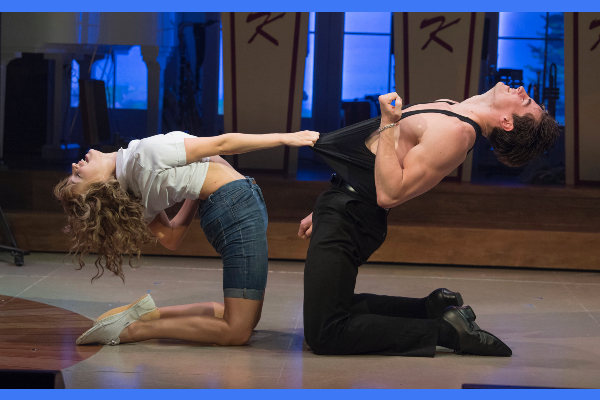 Did anyone apart from me seem to care about this flimsy plot hurtling through a tick list of social issues; abortion, civil rights, domestic violence, white entitlement, manifest destiny, voting rights? No, nobody cared, the audience weren’t there for that, they were there for the dancing, and particularly the dancing of the main seriously hot star of the production Michael O’Reilly as Johnny Castle.

As an adaption of the film -Dirty Dancing – it’s just about holding its own, although I suspect my charade version might hold more narrative from the film, but as a theatrical musical show which brings powerful male physiques  to the fore and allows an almost exclusively female audience to appreciate the muscles, dynamic tension, very tight trousers and hip wriggles of a few – very accomplished- male dancers it works very well thank you very much.

Did I enjoy it?  Well.. when I stopped concentrating and just allowed the raw physical presence of O’Reilly to wash over me in a tsunami of testosterone, of course I did. He’s incredibly charming, flashing his lethal eyes,  perfect teeth, killer smile, thick muscular thighs ( sigh…)  causing whole segments of the audience to swoon or scream in adoration in wave after waves of passion.  It’s certainly an interesting performance to watch, both of masculinity and also of his dancing skills, and here I put down my slightly cynical deconstructive pen and pic up the enthusiastic megaphone – he is a superb dancer. His body writhing with a gymnastic energy which is astonishing, jumping, twisting, lifting, spinning, thrusting, gyrating and doing all the things you can possibly do with a huge thickly muscled body to music. He understands the affect this has on his audience and plays up to that – even better, ramping up the hotness and some of the audience members could barely contain themselves.  There was a lot of whooping, whistling and unrestrained sounds of appreciation. To say the audience couldn’t get enough of O’Reilly would be an understatement, and there was certainly plenty to go around.

The supporting case is just that.  The musicians hold their own and provide some quality house band musical  accompaniment for the bigger ensemble dance numbers. It’s a small stage the Theatre Royal, but the dance group managed to keep a real feeling of movement and style to their group dances whilst working in the limitations of the small space.  With lead singing from Amber Sylvia Edwards and Samuel Baily who both pleased with their evocative singing it’s a good show, the cast, musicians and singers all supporting the powerhouse that is O’Reilly.  Carlie Milners’ dancing ( as Penny)  is breathtaking and on point, she is electrifying, and Colin Charles ( Tito)  opens the second act working the room up into a state of heightened arousal with his singing and on stage sexy lounging. Kira Malou as Baby did a remarkable job of somehow stealing some of the limelight from O’Reilly, but at the end of the day, this show is all about H.I.M.  They know it, we know it, he knows it.

My companion loved it, got rather annoyed with my snipping about the thin narrative, tokenism and lack of character resolution.  They raved about the dancing, which after all, is what this show is all about.  It was lovely to be back in the cosy Theatre Royal, with a few new Covid safe precautions and ideas worked in to the experience to make us all feel safer. ( read more about them here)  But sitting down in the stalls, feeling the energy coming off the stage with this talented group of performers on stage was lovely.

Dirty Dancing is an excellent frothy, fluffy, slightly steamy entertaining show that leaves you smiling and slightly damp. That may have been the hot summer night combined with the very enthusiastic audience but I think it was down to the hot bumping, grinding, flipping, flexing and grinning of the main Hottie on Stage giving us his all and serving up an astonishingly sexy series of perfectly executed dances. By the end, when the very famous film ending is replicated on stage the audience were bursting and thrilled, even I cracked a smirk, but then i’d had two glasses of wine by then. Plus we got to see his perfect ass and massive strong thighs, now what’s not to love about that!

It’s been a long time coming, but this opening night from the Theatre Royal Brighton reminded us of the potential for a great night out at the theatre to give us what we really, really want.  Entertainment. Roll on this new season. You can watch the Dirty Dancing Trailer here

Until Sat 11th September
For more info or to book tickets: