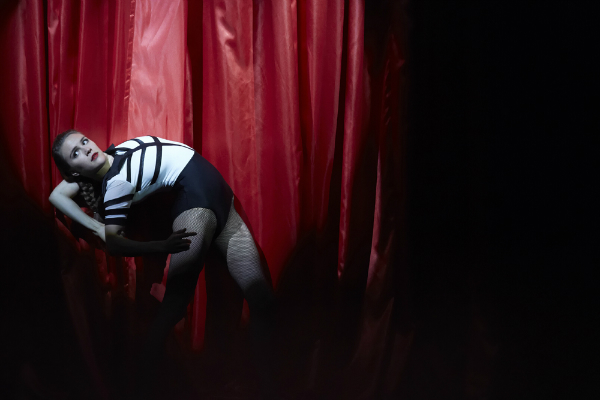 This show is a stunner, full of signature pieces, and also some new jaw dropping tricks and ensemble routines that are breathtakingly good.

This is a troupe very sure of itself and its grasp on this interesting blend of contemporary dance, acrobatics, circus arts and clowning. It’s a heady mix and with some seriously well thought out lighting and attention to musical accompaniment this works very well.

Different musical tracks, none quite by their usual artist combine to add a sense of chaos and unreality, which occasionally bursts out into stage-crafted anarchy.

Circa design shows that push the boundary of the circus art form, blur the lines between movement, dance, theatre and circus and yet are a unique, singular ‘Circa’ experience, this their second appearance at the Brighton Festival shows off their talents with aplomb.

Flinging themselves faster and faster across the stage, jumping and hanging off each other in ever more elaborate and stunning piles of limb and straining muscle they look like they’ve been washed up on top of each other by some enormous waves.

This is more a ‘thing’ than a separate group of people and a writhing thing desperate to regroup and reform in front of our eyes. It’s an astonishingly simple and breathtaking experience of raw talent, split second timing and audacious nerve and it succeeded in each and every moment.

Beyond no doubt works as well for an adult audience as for the afternoon show we saw, it would take not more than a wrinkle of a nose to push this over into something more erotic or darker and yet it balances – as do the performers – on its own turf, well aware of ‘Le Clique’ and ‘Briefs’ and some of the other stunning acrobatic shows around it. Beyond strides with confident into something more artistic, and at the same time more nebulous. The kids laughed at things I thought of as nightmare territory, hollowed out rabbit heads with echoes of The Shinning and Jonny Darko make the kids squeal with delight, one wonders what the mothers of Hanover feed their little ones…

There was s a moment which transfixed the room, brought tears and gasps as chanteuse Camille O’Sullivan wandered on stage, in a floor length diaphanous sequined cape that every queen in the room wanted, then she sang a heart stopping Nick Cave song as the aerialist twirled and twisted high above her on black silk sheet, its was both an homage to their roots, O’Sulliavan famously rose to attention at Le Clique and Circa the talented Australian group behind this show has grown out of the explosion of new sophisticated cabaret. The song smoked it’s way around the room breathed by O’Sullvans tremendous tremulous voice, it was superb theatre and a touch of the maturity of Circa that they make it work so well. Ms O’Sulliavan commands the SpiegelTent at the moment at the Old Steine, catch her, seriously book now!

There are moments when the performers can’t resist showing off their other skills, juggling, squeezing through a tennis racket, balancing on teeny tiny poles and it’s all good stuff of a high calibre but seems to stop the momentum of the show rather than add to it. There is one moment where one of the performers folds a cigarette paper; or what appears to be one, and then sends it spinning like a tiny propeller at the end of his finger, then his toes as he spins, jumps and rolls. It is a very simple trick done with great style and one that the audience loved.

Beyond work well in the Dome too, the venue can often swallow an act but they used the space well, although I rather liked them in other, more strange venues and beseech them to seek a big odd venue for their next Brighton show and avoid the settled stage if possible.