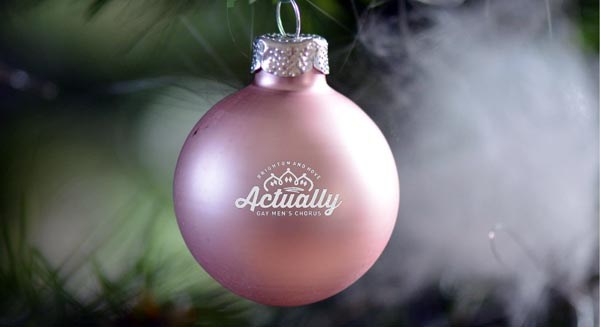 I can’t think of a better way to have spent my birthday other than attending The Actually Gay Men’s Chorus Christmas Concert, It’s Actually Christmas at St Andrews Church, Hove on Saturday, December 22 alongside the Deputy Lieutenant Hugh Burnett,  Cllr Dee Simpson Mayor of Brighton and Hove and a church packed to the seams eager to hear the Christmas concert – the Star on the top of the proverbial tree of concerts in 2018. No-one was disappointed as the standing ovation, cheers for more, and stamping feet at the end demonstrated.

A few years back, when Brighton Gay Men’s Chorus were fresh from their television success and developing their theatrical, all singing/all dancing spectaculars famous for their comic interludes and themed programmes, the Actuallys seemed to be following in the shadows and struggling to keep up in a similar vein.

Not any more! Over the last three years and under the baton of maestro Samuel Cousins, this Chorus has found it’s own voice, it’s own personality and has grown in performance confidence. Nearly all smile now and sing with emotion although a general rule over where the eyeline is meant to be can be the next detail to tackle!

In the same way that BGMC are famed for their wonderful sequinned waistcoats and the recent glorious wash of coloured Christmas jumpers, the Actuallys have also stamped their own look in their shows looking so very smart in wing collars, sparkly broaches and classy, red tailored waistcoats that are made by a chorus member and are reminiscent of a formal, elegant bygone age.

The musical programme was very classical and Simon Gray’s piano accompaniment (exquisite in The Holy City and Pearl Fishers – with the Chorus singing in French) was supported by the Harvey’s Brass Ensemble.

Used sporadically, they were particularly effective in Mary’s Boy Child and Stop the Cavalry.

Soprano Melody Hornett was stuck in Boston due to the Gatwick drones, but her place was superbly covered by the beautiful voice and humble approach of one of my favourites, Karen Orchin. I particularly liked The Holy City.

There were several well performed solos and an excellent Let it Go from Philip Davies and Jack Lynn the latter of which charmed us with one of his self- penned and thought provoking poems, delivered with fun as well as passion.

With the gentle Irish comedy of host Gerry McCrudden linking but not over-powering the singers, it was a marvellous evening and also supported the Sussex Beacon.