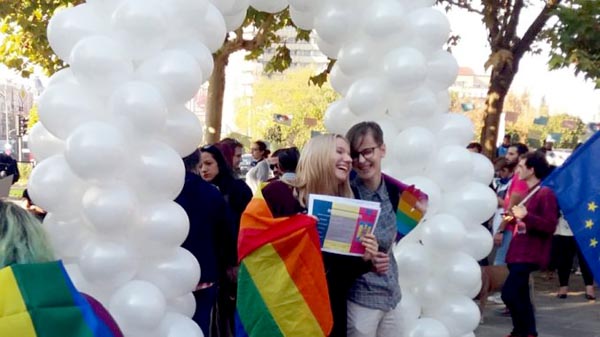 LGBT+ people in Romania won a reprieve on Sunday, October 7, as an initiative to constitutionally ban same-sex marriage in Romania failed to gain enough votes to move the political process any further.

This win for LGBT+ rights groups in Romania comes only months after the country’s top court ruled that same-sex couples should have the “same rights to a private and family life as heterosexuals” in June 2018.

Jessica Stern, Executive Director of OutRight Action International, said: “The Romanian people made the right choice by not legitimising this vote. Minority rights should never be voted upon by the will of a majority.”

The referendum on the definition of marriage within Article 48 of the country’s constitution took place on October 6 and 7 and had the potential to contradict the high court’s ruling and issue a step backward for the status of LGBT+ rights in Romania.

Only  20% of the population showed up to vote when a requirement of 30% of the voting population (5.6 million people) was needed in order for the referendum to be deemed legitimate.

Vlad Viski of LGBT+ rights group Mozaiq, which has been campaigning for nationals to boycott the vote, said: “For the LGBT community in Romania this is a huge victory after three years of fighting against conservative voices, against hate speech. We are glad and we applaud the Romanian people for standing up against intolerance and hatred. It is a huge victory for the Romanian democracy, which keeps Romania on its European path, where minorities are respected. 17 years after the 2001 decriminalisation of homosexuality, we see that Romanian society is changing for the best. We have gained thousands of allies throughout this fight for equal rights and now we are asking major political parties to show responsibility and legalise civil unions as soon as possible. We deserve rights, we want rights, we won’t stop.”

In spite of the rejection of the referendum, same-sex marriages are neither recognised nor granted the benefits of marriage in Romania. The Romanian constitution does not stipulate gender of partners in marriage, but rather describes marriage as a “union of spouses.”

The measure on the referendum, if accepted, would have rephrased the constitution to explicitly state that marriage be a “union of one man and one woman,” thereby officially making same-sex marriages unconstitutional in Romania.

The referendum was supported and brought about by Romanian conservative-religious group The Coalition for Family, which collected three million signatures last year in favour of the proposed change to the constitution.

Romanian Orthodox Church Patriarch Daniel, in support of the referendum, claimed that a ‘yes’ vote on the referendum would be “Christian, democratic and patriotic.”

Kim Davis, the Kentucky clerk who went to court for the right not to issue licenses to gay couples, had also campaigned in Romania sponsored by Liberty Counsel, a right-wing, anti-LGBT legal group.

Notable opposition to the proposal came from the Save Romania Union and President Klaus Werner lohannis, who said that being an ethnic German, and therefore a member of an ethnic and religious minority, he supports tolerance and openness towards others who are different while rejecting religious fanaticism and ultimatums.