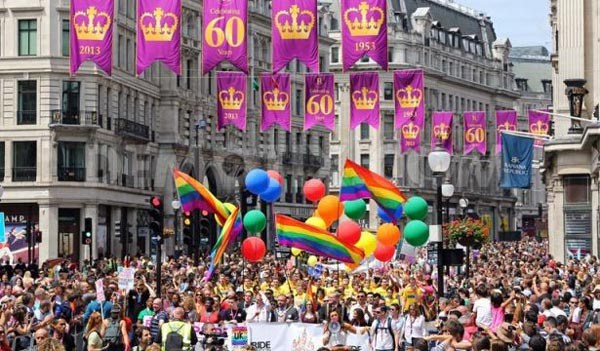 Celebration, diversity, activism, a demonstration — whatever it means to you – Pride in London returns to the capitol today, Saturday, July 6 and is set to be the biggest yet.

LESBIAN, trans, genderqueer or otherwise; wherever you identify, Pride in London is about the people, for the people.

This year Pride is celebrating 50 years since the birth of the modern LGBT+ rights movement and the parade promises to be their most diverse yet.

The parade will start from Portland Place at 12pm (midday), moving down Oxford Circus, along Regent Street to Piccadilly Circus, Lower Regent Street, Pall Mall and then passing Trafalgar Square before finishing on Whitehall.

Organisers recommend that spectators avoid busy locations such as Trafalgar Square and Piccadilly Circus as the parade will take up the whole afternoon until around 5:30pm.

Along the Parade route keep an eye out for the podiums – manned by friendly parade hosts who will let you know who is who and what is what during the Parade, making sure you don’t miss a thing.

To book a Grandstand seat (cost £65) to make sure you don’t miss out on any of the action, click here:

The main stage in Trafalgar Square will be headlined by Grammy and Tony Award winner and star of Pose, Billy Porter who will be joined by more than 100 performers on five stages across the capital, including Eurovision and the X Factor singer Saara Aalto and RuPaul’s Drag Race rebel Willam.

To make a donation towards the cost of staging Pride in London, click here: