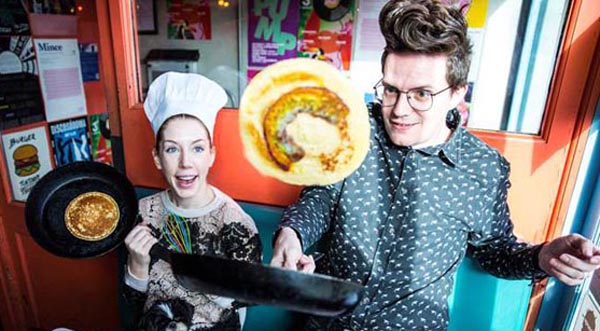 Comedians Katherine Ryan and David Morgan battled it out for the title of Biggest Tosser at the launch of Terrence Higgins Trust’s (THT) pancake-themed fundraiser, Toss Off.

The TV favourites whipped up a stack of rainbow pancakes to mark LGBT History Month.

THT is urging supporters to host a party for Pancake Day (February 28) and raise money to support people living with HIV.

Friends Katherine and David went along to East London LGBT venue Dalston Superstore to see just how much fun it is to Toss Off for THT.

Katherine, who was accompanied by her tiny dog Megan, said: “Toss Off combines three of my favourite things: over-eating, being competitive and raising money for the brilliant work of Terrence Higgins Trust. As far as I’m concerned, Pancake Day just got a whole lot more fun.”

Canadian Katherine, a regular on Mock the Week, 8 out of 10 Cats and Have I Got News For you, added: “I’ve never wanted to be known as the Biggest Tosser before, but now I wear that title with pride. The rainbow pancakes look amazing and they’re so easy to do – I encourage everyone to hit the food colouring aisle and celebrate Pancake Day and LGBT History Month in one go.”

David, who co-presents I’m a Celebrity…Get Me Out of Here! NOW, said: “I’ve thoroughly enjoyed my first Toss Off because I love rainbows and I love pancakes. As a gay man, HIV support, prevention and awareness-raising is very, very close to my heart and I’ll happily flip some pancakes with my friends to support THT this Pancake Day.”

You can sign up for a free Toss Off party pack on the charity’s website, which includes colourful bunting, a chef’s hat for the host and delicious pancake recipes to help you get creative in the kitchen.

Geordie Shore’s Charlotte Crosby will also be getting her frying pan out to Toss Off for a second year.

She said: “I’m a massive fan of THT’s pancake-themed fundraiser, Toss Off! I take Pancake Day extremely seriously and I’ve already been in my kitchen practicing my Toss Off skills ahead of the big day. I can’t wait to have my friends round, eat way too many pancakes and raise money for Terrence Higgins Trust to support people affected by HIV.”

Adam said: “The great thing about pancakes is they’re made of stuff you already have – milk, eggs and flour. Then the flipping and the rainbow effects are what makes it really fun. There are lots of options too – marbling the pancakes, making a stack with lots of different coloured pancakes, or piping out a rainbow using a nozzle-topped bottle.

“I’m really into burgers and I made rainbow cheese for Pride in London last summer. But this was my first attempt at rainbow pancakes and I would definitely recommend it to a friend.”

Pancake Day is on Tuesday, February 28. You can support THT by hosting a Toss Off party for your friends any time from Saturday, February 25 through to Sunday, March 5.

You provide the pancakes and your guests donate money to support people living with or affected by HIV.