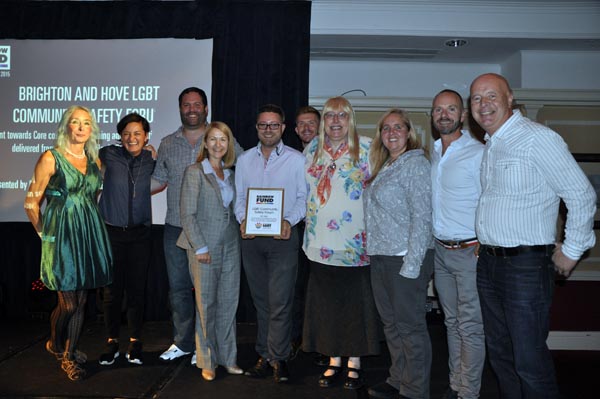 The Rainbow Fund Awards on Tuesday, September 8 at the Hilton Brighton Metropole Hotel saw more than £78,000 in grants awarded to local LGBT/HIV groups and organisations who deliver effective front line services to LGBT people in the city.

The awards were hosted by comedienne and Rainbow Fund Patron, Zoe Lyons who was joined by Sussex Police and Crime Commissioner Katy Bourne, Conservative Group Leader Cllr Geoffrey Theobald, his wife Councillor Carole Theobald and LGBT community leaders to make presentations of the grants to LGBT/HIV organisations in Brighton & Hove who deliver effective front line services to LGBT people in the city.

The Mayor of Brighton & Hove who was at another function sent a message of support congratulating Brighton Pride on their fundraising achievements and the Rainbow Fund for their work supporting LGBT and HIV organisations in the city. She emphasised how important Pride is to the city and highlighted the financial impact the event has on local businesses.

Brighton Pride is a CIC company and any profits have to be ploughed straight back into the company. If it rains one year the Rainbow Fund still gets the £1 a head on any tickets sold while Pride could well struggle to pay its bills and the city would lose it biggest public event.

All three local MPs sent apologies for not being able to attend as they were sitting in Parliament. No local Green or Labour councillors responded to the invitation to attend the awards.

A total of £100.000 was raised by Brighton Pride in 2015. £90,000 has been donated to the Rainbow Fund, bringing the total raised by Pride over the last two years for good causes to over £200,000. A further £10,000 has been set aside for a new social impact fund for areas in the city affected by the Pride main event and Pride Village Party.

In this funding round £78,304 was awarded to the following organisations:

♦   OLDER AND OUT: Received a £5,000 grant towards providing continuing support for social activities, lunches and representation for LGBT elders: Presented by Carol Theobald Conservative Councillor for Patcham.

♦  BRIGHTON and HOVE LGBT SWITCHBOARD: Received a £5,000 grant to pay for external clinical supervision for counsellors: Presented by Andrew Kay from Latest TV.

♦ SUSSEX BEACON: Received a £4,350 grant towards equipping Rainbow Fund Treatment Room for use of nurses and service users of the Sussex Beacon: Presented by Chair of the Gay Business Forum and St James Street Pubwatch, Alex Matthews.

♦ RAINBOW FAMILIES: Received a £2,580 grant towards funding a range of activities and events designed to engage older children within LGBT families to develop friendships: Presented by Pride Ambassador Aneesa Chaudhry.

There will be a second funding round in Spring 2016. Details will be announced on the Rainbow Fund website in the new year.

All grants have been awarded under condition that small groups attend the quarterly meetings of the LGBT Small Groups Network and all LGBT/HIV groups send a representative to the LGBT Community Safety Forum’s four quarterly public meetings.

The next public meeting for the LGBT Community Safety Forum is their AGM on Wednesday, October 28 at the Queens Hotel at 7pm when they will be presenting the findings from the 2014 Police Trust and Confidence Survey.

For more information about the Rainbow Fund, click here: