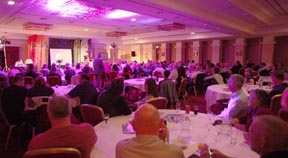 The great and the good attended the Rainbow Fund Awards ceremony at the Brighton Metropole Hilton last night.

Rainbow Fund chair Chris Gull explained the Fund’s new community interest company (CIC) structure and thanked former chair Paul Elgood for delivering the highest-ever total for a grants round during the previous twelve months. Paul remains the CIC director and a member of the grants panel.

Grants were made possible thanks to fundraising by Brighton Pride, the Brighton Bears Weekender and nearly twenty fundraising events and activities in aid of the Rainbow Fund this summer organised by venues such as Legends, the Queen’s Arms, the Marine Tavern, Dr Brighton’s, Subline and groups and individuals including the MCC, the Eurovision Party, Jamie Hakim and George Montague, the Oldest Gay in the Village.

Peer Action received £5,000 for activities and treatments for people with HIV.

Sussex Beacon received £5,000 for an alcohol-related health project for people with HIV.

Older & Out received £4,360 for activities for older LGBT people.

Out in Brighton received £2,500 towards LGBT radio training and equipment costs.