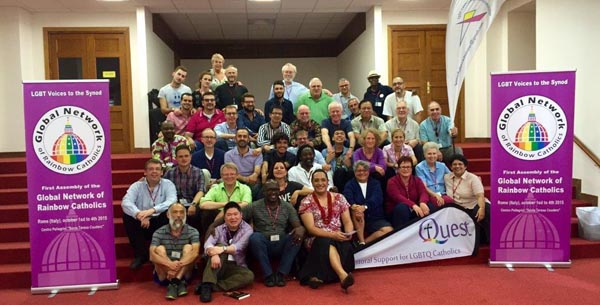 The Global Network of Rainbow Catholics (GNRC) was launched in Rome on Sunday, (October 4), at the end of a Foundational Assembly, held from October 1-4, 2015.

Ways of Love – Snapshots of Catholic Pastoral Encounter with LGBTI People and their Families was attended by over 120 delegates who heard a powerful interview with former Irish President Dr. Mary McAleese by Robert Mickens, and a keynote closing address by Bishop Raul Vera OP from Saltillo, Mexico.

Other speakers from Chile, England, Italy, Kenya, Thailand and the United States spoke of positive models of pastoral care for LGBTI people.

A Steering Group, representing Africa, Asia, Europe, Latin America, North America, and Oceania, including a range of ethnicities, gender balance and younger people was elected by delegates from 31 different countries.

Ruby Almeida and Eros Xiao from the LGBT Catholic community were among those elected. Further positions will be filled in another election round of member-organisations.

The GNRC Assembly sent the following Open Letter to Bishops attending the Synod on the Family at the Vatican.

Dear Sisters and Brothers at the Synod on the Family,

Greetings from the new-born Global Network of Rainbow Catholics!

We are a group of lesbian, gay, bisexual, and transgender Catholics, and along with our loving families and friends, we have spent the last few days not far from you, in Rome, consolidating two years of work, which have advanced alongside your double Synod preparations.

We come from over thirty countries, both as individuals and as representatives of groups, who have been involved with the flourishing of people like ourselves in the lives of our local churches, (as well as with many other tasks). The last years have not been an easy ride! Many in our Church thought that they were serving God by hating us, and some still do, especially among the hierarchy; but we can tell you with joy, that we have kept alive our Confession of the Catholic faith! We have kept the faith under persecution, and are ready to join with you in the joyful announcement of the Gospel to which Pope Francis has called us.

Because God is wonderful, we have found that through this life as dregs among the people of God, the Holy Spirit has given us a surprising (at least to us) capacity to stand up and be counted, not to be frightened of those who fear us, not to be resentful of the incapacity for approval, and the bureaucratic meanness of spirit and dishonesty to which we have regularly been subjected. We have learned that it is not what the Church can do for us, but what we can do for the Church that matters.

We need to be better prepared to join you in your task of spreading the Gospel and building up the families in which (as we have so often experienced ourselves) God delights. We need to support each other, and others more vulnerable than ourselves, at a worldwide level, especially in countries which criminalise us, and even think they are honouring God by killing us. We need to be able to share information, counter falsehood, encourage each other in our needs, and strengthen our families, especially where civil law does not yet respect them. So we have decided to set up a Global Network, to bring together groups of LGBTI Catholics, our families and friends, as well as other Christians and people of good will. This will enable us to be much better prepared to share experiences, life stories, examples of best-practice: little miracles of love.

We want to set up our network in such a way that we can even be useful to you, though we know from long experience how frightened many of you are of communicating with us discreetly, even less talking to us on the record!

Having learned, by living with Jesus, not to be dismayed by the falsehoods and calumnies concerning us to which some of you still seem wedded, and even pass off as “teaching of the Church”, you will find us resilient, because we know that we are loved. In the near-absence of visible shepherds, we have come to trust and love a Shepherd who was not ashamed to give himself to death for us, One whose voice we hear, with whom we are not in rivalry, and in whose light all others who call themselves shepherds can be tested for their fruits. Because of this, you may even be surprised to find us meek!

So we write to you to wish you encouragement for these days of your Synodal gathering, as well as for the months and years to come as we all begin to live the hints of the new that are coming to birth, discovering new ways of celebrating the family, rather than condemning wine that threatens to burst old wineskins. We are thrilled that you heard with us Pope Francis’ wonderful homily in Philadelphia last week, where he drew out the consequences of both Jesus’ and Moses’ rebuke to those who would hold back the Spirit.

We have prayed for you at every Mass at our meeting, and we ask you to pray for us, confident that we will soon be able to meet transparently, with joy. For we are amazed to have discovered that over the last few years, despite everything, and because nothing is impossible to God, we have become insiders with you in the life of the Gospel, and co-sharers in all your joyful tasks.

With warmest greetings from your rainbow sisters and brothers in Christ.