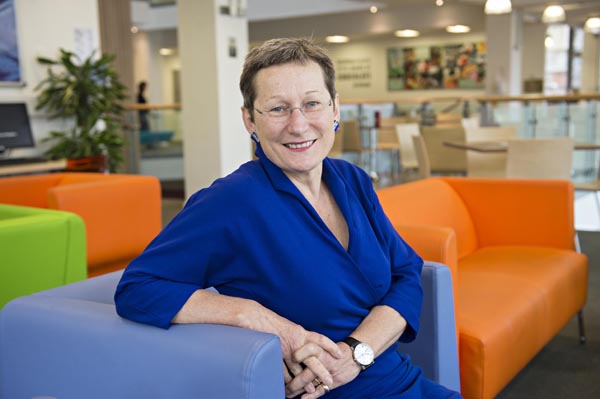 Professor Humphris is due to be interviewed on RadioReverb, the non-profit organisation run by volunteers, during the Out in Brighton programme on Thursday next week (2 June) at 5pm.

Professor Humphris will present the Lesbian, Gay, Bisexual, Trans and Queer (LGBTQ) Life Research Hub’s final year dissertation award to Jasmin Bradley who is just finishing her final year of medicine at the Brighton and Sussex Medical School, run jointly by the university and partners. Winners of the award deal with issues important to the field of sexualities, genders and LGBTQ lives.

Jasmin’s research showed there was evidence to suggest that medical staff believe health outcomes are marginally poorer for LGB individuals in the areas of anxiety, depression, self-harm, and suicide.

She concluded: “These findings reinforce findings from NHS North West and the Lesbian and Gay Foundation, which found that health service workers anxiety paralleled their assumption of low patient comfort levels with sexual orientation monitoring. The results from this study will inform the development of future research investigating the barriers to the monitoring of sexual orientation in healthcare settings.”

Jasmin will be pursuing a career as a doctor after graduating in July: “I very much enjoyed the course and feel it as well prepared me for my future clinical practice.”

The student prize committee members, all University of Brighton researchers working in the field of gender and sexualities research, said the following about Jasmine’s work:

“This piece of research makes a valuable contribution towards our understanding of social determinants of health in relation to minority populations and therefore towards identifying ways to improve the health and wellbeing of the LGBT population. The work is commendable in its breadth and reach as it sought to include all 615 GP practices in Kent, Surrey and Sussex in a questionnaire survey. The study was meticulously planned and conducted, theoretically well-informed as well as mindful of its limitations. It offers up a number of potentially fruitful avenues into future research that is clearly needed to continue to improve attitudes amongst GP staff in relation to sexual orientation of patients and to eradicate health disparities amongst minority populations.”

Out in Brighton has the largest international podcast reach and is one of the most listened-to LGBT shows on podcast.

Professor Humphris said: “I am very much looking forward to the broadcast and to meeting Jasmin who has done some great work uncovering attitudes within primary care towards the LGBT community, her approach to the research process was meticulous.”

Professor Kath Browne, Professor in Human Geography, also due to take part in the broadcast, added: “It is a fantastic opportunity to hear the first out Vice-Chancellor speak about her career and LGBTQ issues. I look forward to the conversation and hearing from another outstanding student prize winner. Every year the field is stronger as more and more students seek to undertake research on issues of gender and sexuality.”