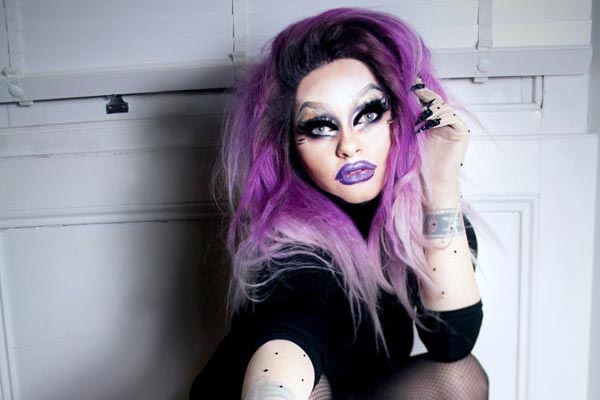 Violet Valentine (Zoe Anslow-Gwilliam) – I guess it is time to introduce myself to Gscene readers.

I’M also Violet Valentine, an AFAB queen. For those wondering what AFAB means; AFAB means ‘assigned female at birth’, however, it can mean a fab(ulous) queen if you want it to!  I’m here to represent and showcase the new era of all things queer and creative on behalf of Gscene.

I work across many creative fields, from photography, graphic design, make-up art and add drag to the list. Despite being quite new to the scene, I’ve made a name and a base for myself in a little over a year, spanning cabaret shows, bars and clubs from London to Brighton. I’ve even hosted my own cabaret night called Battle! With Violet Valentine, a tournament style drag show, a few times too.

With a little over a year’s drag experience, I’m relatively new to the gig, let’s be honest. My first encounter with drag was probably in some random pub many years ago on karaoke night where a Dame Edna like older lady offered up offensive jokes and free drinks tickets per rendition of musical theatre classics. That was my preconception and misconception of drag. I, like many people, assumed drag was old men dressing up in a frock and singing mediocrity for the entertainment of drunken punters on gay night for cheap laughs. Apart from these assumptions, drag had never really been on my radar.

I moved to Brighton in 2014 to study textiles at the University of Brighton. Cut to the copious nights out and newfound freedom in Brighton, I became inexcusably gay and proud in ‘the gay capital of the UK’.

My first true encounter with drag was that year in Club Revenge on a Thursday night for the infamous FOMO club night where I happened to be greeted on the dancefloor by a mysterious but brash blonde wielding a bottle of tequila and clear expression of what can only be described of loving disgust. Lydia L’Scabies, indeed. I became surrounded by drag inadvertently.

My first time in drag wasn’t as a drag queen but as a drag king in 2016 when I attended the yearly King of Fringe show at the Marlborough Theatre. I had no drag name, no drag back story, but I wanted to exude that confidence, dress up as a lad and cause mischief. I won best dressed, I might add. The confidence that those kings, such as Louis Cyfer, displayed truly made me fall in love with drag for the first time. The drag king scene is a magical place where the rules are flipped and toxic masculinity is banished.

I then realised that situation probably wasn’t my first time in drag, it was in fact in Wolverhampton, around 2010, when I played Ferdinand in The Tempest and I pretended to be uncomfortable with having to kiss a girl. It really was a tragic comedy. The heteronormative ‘single sex’ selective grammar school had unknowingly created the space for a very gay story line to occur. I was realising more that I’d always been surrounded by drag, in some way or another. Soon after my first appearance in drag, I wanted to explore drag more.

For Halloween, the same year, I attended work at Club Revenge (shocking, I realise) in drag as The Joker. Fast-forward a few months and various performances later, I had a drag king persona, Zack The Lad. I thought I’d truly discovered drag by this point. I was definitely wrong.

I found about queens such as Victoria Sin and Tete Bang, fellow AFAB queens. I discovered more about the true gender bending nature of drag. I didn’t need to be a drag king; I could be a drag queen too.

Like many baby queens, I blocked my brows questionably, shoved on an unstyled wig, constructed a camp and feisty ego, made a terrible mix featuring Charli XCX and the Cash Me Ousside girl and off I popped to the local gay bar to perform.

Violet Valentine was created. I performed more and with each performance I became more confident and comfortable, in and out of drag. I still adored drag kings, but I discovered that I, personally, could be more creative with presenting as Violet than Zack.

With relentless research into drag, also known as ‘partying’, I started exploring new scenes. I went to club nights such as Wut? Club and Dollar Baby. I found extraordinary spaces where people were like me; very queer. I made friends with people such as Prince Jay Jay, who was the first person to introduce me to the club scene of London, full of unique club kids, the eccentric party attendees of infamous club nights. Gluing paper to my face and dancing to Sophie? Sign me up.

The attraction of drag and queer performance for me is the outlet to be artistic. Anything I do, I like it to be creative; I’m an Aquarius if you hadn’t guessed by now. I like creating new concepts to use for looks and characterful performances and if this can have a political importance to all the better.

Being an AFAB artist, I’ve been surprised by the welcoming responses I receive from an audience. However, sometimes short-lived because of comments such as: “You look good in drag but I don’t really agree with women doing drag in general”, or “I can so tell you’re a woman though” are made. Whilst I might receive passing comments of adoration for looks, there is a negative undertone attached to countless remarks. There’s also an overall negative response to the art form; reaffirming the concept that the stereotypical style of feminine polished cis male drag was the only valid form of drag.

Drag has become a way for me to utilise gender in art but more importantly discover the importance of queer culture and the political significance this has. I’m fascinated by the dynamics of the queer scene. Queer nightlife may pass as frivolous and fun but the fact is that queer nightlife is extensively important in the ways in which queer culture functions. Without the Stonewall Inn, an underground gay bar in NYC, we wouldn’t enjoy the same rights today. Without Sundays at Legends… Okay, you get the idea.

I’ve grown to be more unapologetic with how I navigate as a queer AFAB person helped by the decision to design my looks and art to be how I want, not how they’re expected to be and with this actually comes better and truer art.

For those who read Gscene regularly, I aim to provide entertainment with exciting stories of new work being produced within the queer scene. I want to expand the knowledge of gender and sexuality and how this impacts the work created by minority groups and the spaces in which they exist. I aim to showcase the shocking complexity and creativity that the new era of the LGBTQ+ scene has to offer. I hope you’re excited as I am.