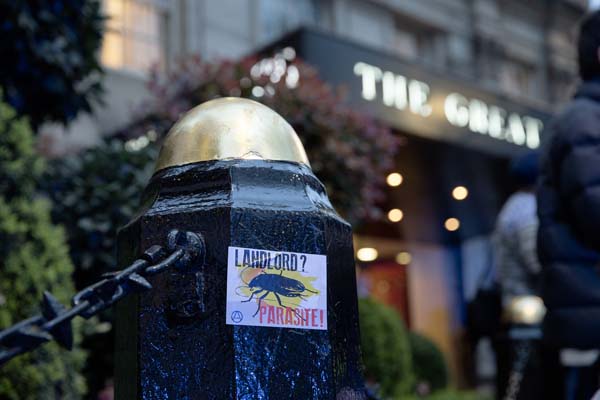 Last night a group of LGBT+ activists dumped manure and released cockroaches on the red carpet at the London Property Awards.

The action blocked off the annual celebration of “an industry which leaves queer youth homeless on the streets of London” and in the process property developers in tuxedos were forced to scuttle into the Grosvenor House Hotel through the back door.

The Sexual Avengers are a network of campaigns and individuals campaigning for queer rights through direct action and community building.

They recently made national headlines after putting a queer spin on the famous English Heritage blue plaque campaign, placing subversive blue plaques on the House of Lords and other London landmarks.

The action was intended to remind attendees at the £3,000-a-table dinner that their profits are sucked from a system which is responsible for the oppression, homelessness and deaths of queer people.

A spokesperson for the group said: “They are celebrating on the bodies of our brothers, sisters and non-binary allies”.

Research shows one in four UK homeless youth are LGBT+, and this figure is rising by 20 per cent each year.

1 in 4 UK LGB people and 4 out of 5 trans people have experienced domestic violence, while queer people are 2 to 3 times more likely to experience mental health issues.

A spokesperson for Sexual Avengers, said: “We are at the mercy of the housing market, where landlords and letting-agents condemn us to live in unsafe flats among filth and vermin. Property developers have grown rich by building multi-million pound housing projects, gentrifying working-class, multicultural areas and driving impoverished queer people away from support networks and into the street.”

The Sexual Avengers are demanding:
♦  Social housing built for need not greed: with 60,000 new genuinely affordable homes per year being built as a minimum.
♦ The provision of queer-specific homeless support services, and an end to irresponsible luxury developments driving working class people away from their support networks through gentrification.
♦ The scrapping of Help to Buy and Right to Buy, which systematically breaks up the social housing system and inner-city communities so many LGBT+ rely on.
♦ A rent cap pegged to the average income and council housing rent rates.

Sexual Avenger Stacey Jones, said: “My partner died of cancer last April, and they wanted to kick me out in May. They couldn’t understand how I could be in a relationship with a woman when I had a child.  I’d just lost my partner and had to sit there and justify my sexuality. Why did I deserve the house where we lived, where I cared for her and where she died?

Sexual Avengers is queer led but welcomes all genders and sexualities at their meetings every Wednesday from 6.30-8.30pm in East London.