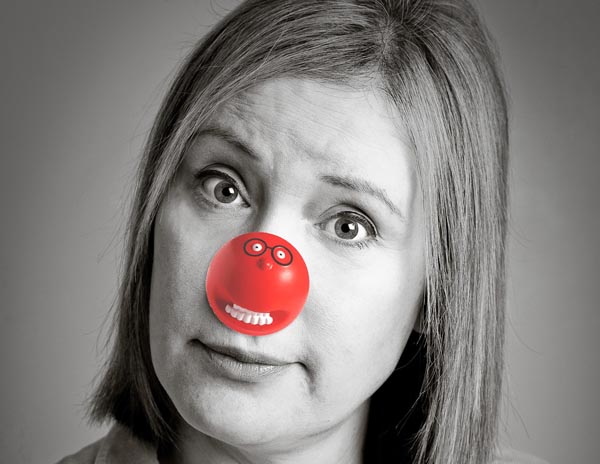 Claire Parker, is a stand up comedian, blogger, radio presenter, BBC writers consultant, project lead, oh and is a woman who also happens to be trans.

SHE is also effortlessly calm and on her BBC writers room blog states:  Why don’t we all put down our mud. Draw a line under it all and invite each other to the party.

Making the trip to Brighton via Redhill, I began by asking Claire how she first developed an interest in performing on the stand up comedy circuit: The comedy started around seven or eight years ago. I’d wanted to do some acting and dabbled in amateur dramatics, some directing and sound and lighting, but then I took the Jill Edwards course in Brighton and it went from there to Edinburgh and all around the country. As part of the BBC writers room blog, Claire writes: I realised a long time ago that people were fed up with the myriad of documentaries and shock, voyeuristic programs purporting to show the trans experience. Contrary to the popular tropes and memes on telly, I do not spend sixty-two percent of my time in front of a mirror putting on make up. Neither do I supplement my pension by working the streets for money. She explained to me that When I started I did that whole trans-angst thing but quickly realised people didn’t want to know about the gory side of what my life might mean to me, people are much more engaged in your comedy, and conversation, when they discover the bits in the middle.  What helps people come over to your side are the bridges you’re able to build between people and as a comedian I accept that some just don’t want to hear about the trans stuff. Eddie Izzard used to talk about his transvestism in his act but he doesn’t now, not that Transvestism and Trans issues are at all the same, they’re not.

And how do audiences receive you? Do you notice much of a change depending on where you are in the country? Where I am can determine how the material lands, sometimes, the further I am away from the culture the jaws drop and I can hear the gasps, but to be honest it’s only the Daily Mail reading chattering classes that are really difficult. If an audience starts to go quiet you know you’re losing them, if they start talking it’s getting worse and then once the heckles come you just have to say ‘hey – I tried’. Sometimes the audiences you think might be trouble are not at all. Such as? I’ve had some great gigs in what are essentially builders pubs. Most people are quite matter of fact, skin deep. Loads of guys want to come up and say hello but they do what I call the “I’M NOT GAY handshake”. What’s that?? They thrust their upper body forward but push their arse as far away as possible because they don’t see that there’s a difference between homosexuality and trans. Preference and gender are just not the same thing.

It must take guts to stand up on stage in that kind of environment does the safety factor never cross you mind? I’ve only been physically attacked once. You know the scene in Crocodile Dundee where he [Paul Hogan] grabs the crotch? After a gig, this guy came up to me and, well he thought he had the right to re-enact that Croc Dundee scene. As he grabbed me he even said “Crocodile Dundee!” as though that made it acceptable, explaining why he was doing it you know?

Have you noticed attitudes begin to change over the years? Caitlin Jenner has received a lot of attention in the past couple of weeks, does this kind of international attention help at all? Look, it’s been great for her although I understand there’s a little backlash happening right now. I just wish celebrities would come out sooner and not wait until it’s safe to ride on the established bandwagon. Is it right for the trans community to only get this level of attention in the celebrity domain? Let me ask you Craig; what do you think of it? Does this attention push our message on or normalise what it’s like to be trans?

I thought Jon Stewart’s comments were interesting, the ‘welcome to what it means to be an American woman’ approach. Your athletic achievements no longer have meaning it’s all about your appearance, and give it two years, as soon as you’re sixty-five you’ll disappear from view like all older women who are no longer considered young enough to be attractive. Exactly, the danger with Caitlin Jenner being the celebrity face of trans is an expectation that all trans women must conform to a particular type of what is considered beautiful. It’s just not realistic.

Why do you think it took Stonewall so long to add the ‘T’ into their organisation? I would love Ruth [Hunt, Chief Executive of Stonewall] to come onto my radio show so that I can ask her exactly that question. It is great that they are recognising the T aspect of LGBT and I don’t want to be negative about what happened in the past. I guess they were getting to a particular stage with the LGB, I don’t believe they were intentionally exclusive, they just didn’t have that experience of being exposed to the everyday life of the trans community.

What do you think changed for them? When enough pressure builds up it just washes in and whilst it would be fantastic to know what changed, it’s fantastic to have that credibility now.

Claire can be heard on her monthly outing on Radio Reverb with Time 4 T, Europe’s only dedicated transgender FM radio show, 97.2FM and you can follow her blog at www.transcomedyaward.org