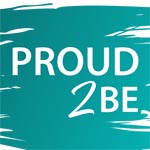 The yearly event will be held at The Civic Centre on Saturday September 14, 2013 at 11.30AM and will include a live panel debate, live music, food & drinks, workshops and stalls for local community organisations and the Devon & Cornwall Police.

“Devon and Cornwall Police are proud to support Totnes Pride as part of our commitment to the LGB&T communities in the area. We would also like to congratulate Mat and Jon Price and the Totnes Pride team for organising the day and hope that this can be established as a successful annual event”

Founded and directed by identical twin brothers Mat and Jon Price, Proud2Be has already been put forward for a Princes Trust award and a National Diversity award.

The project started as the gay brothers sat in front of their web cam and told the world they are “proud to be gay”.

Through the project, Mat and Jon will not only host the yearly pride event and run the campaign but also facilitate social groups and residentials.

“As gay children growing up in a small rural village we both know how isolating it can feel to be LGBT identified and have little access to those of the same community.

“We felt it was time to bring Pride into rural areas where LGBT people are at most risk of feeling isolated and invisible”.

The Proud2Be Project invites everyone to attend whether LGB or T or their friends, family members or supporters.

The Proud2Be Project is looking for volunteers to help out on the day.

To find out how to get involved and to learn more about Totnes Pride, CLICK HERE: