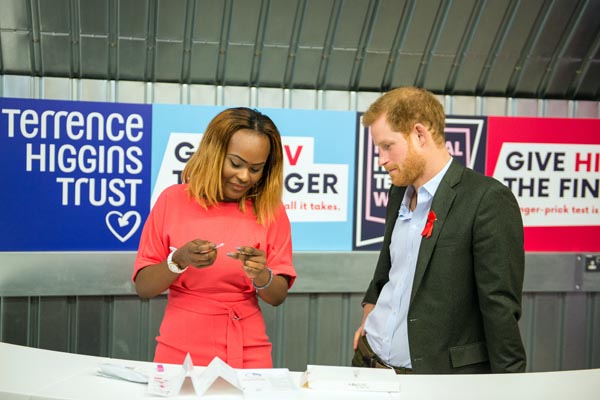 His Royal Highness met with Andrew Bates, a young man who was diagnosed with HIV in 2015, who shared his story and talked about the importance of testing.

Prince Harry also met Yvette Twagiramariya, reporter and one of the faces of the It Starts With Me campaign, who took a live HIV test to show Prince Harry how the self tests work.

Before departing the shop, the Prince met and talked with some local Hackney residents, and gave each of them one of the self test kits to take home.

The visit coincides with new figures from Public Health England on HIV that show the drive to increase HIV testing is having an impact, with a 21.8 per cent drop in the number of people who are undiagnosed and do not know that they’re living with HIV.

However, there are still 10,700 people in England who are unaware that they’re living with HIV.

In addition to this, late diagnoses is decreasing at a slow rate, with 2,170 people living with HIV being diagnosed late in 2016.

“Incredible progress has been made to reduce HIV transmission and late diagnoses, and support people living with HIV, which would have been unimaginable even three or four years ago.

Dr Valerie Delpech, Head of HIV Surveillance at Public Health England said: “This year, there are three firsts in the 30 year history of the UK HIV epidemic.

“HIV transmission among gay and bi men has fallen, and the death rate among people with HIV who are diagnosed promptly and on treatment is now comparable to the rest of the population.

“We celebrate these extraordinary achievements which are the result of a comprehensive response involving many key players and organisations .

“By continuing to invest in effective preventative measures including condom use, expanded HIV testing, prompt treatment and the use of PrEP, the elimination of HIV transmission, AIDS and HIV-related deaths could become a reality in the UK.”