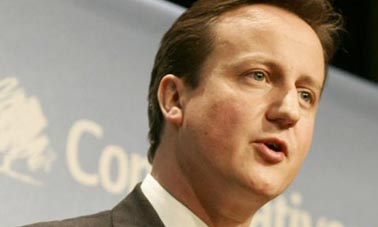 The Prime Minister, David Cameron MP has confirmed media reports that he is to back same-sex marriage in church.

Speaking this afternoon, Friday, December 7 the Prime Minister confirmed that he did not want gay people to be excluded from being married, but made it clear that the legislation would protect any church, synagogue or mosque that did not want to want to comply. He promised a free vote in the house for all Member of Parliament but made it clear he would be supporting it personally.

“I’m a massive supporter of marriage and I don’t want gay people to be excluded from a great institution. But let me be absolutely 100% clear, if there is any church or any synagogue or any mosque that doesn’t want to have a gay marriage it will not, absolutely must not, be forced to hold it.”

“We are committed to bringing equal civil marriage forward and the consultation results will be announced next week. We are very clear that religious organisations must be protected and that none will be forced to conduct same-sex marriage.

“EU law is very clear that this is the case and we will additionally bring in very strong legal locks to ensure that this is watertight.”

“We’ve long campaigned to allow religious organisations to conduct same-sex marriages if they wish to do so.
“This is an important issue of religious freedom and many gay people of faith will welcome proposals allowing them to celebrate their marriages with their pastors and fellow congregants.”

“The Prime Minister’s desire to give religious institutions the chance to offer marriage services for same-sex couples is welcome, but it doesn’t go far enough.

“Religious institutions currently exist in a legal niche where they can discriminate on the basis of sexuality against same-sex couples. However, Governments should not shy away from attacking discriminatory practices in every part of society. Apart from religious bodies, any institution which engages in this form of discrimination would be pilloried by public opinion and would certainly be on the wrong side of the law.

Regardless of sexuality, people should be able to choose whether or not they have a religious wedding. Until this is backed up by legislation, the discriminatory practices of religious institutions won’t reflect a society that aspires to be open and inclusive”.

Stephen Gilbert, the Lib Dem MP for St Austell and Newquay, a long time campaigner for  same-sex marriage, commented that to allow churches to opt-in to equal marriage was a welcome step forward.

“It’s very welcome news that churches which would like to conduct ceremonies for same-sex couples will be allowed to under the Coalition’s proposals.
“The important point is that it will be for churches to decide and no church will have to do anything they don’t want to.
“Liberal Democrats have long fought for equal marriage and now we’re in government we’re committed to making it happen.
“Love is the same, straight or gay, so the civil institution should be the same too. Widening equal marriage to allow churches to opt-in is a very positive step forward.”

“This news will provide a welcome boost to the Scottish Government’s equal marriage legislation, and it is a further indication that the proposals are fair and progressive. It is good to see the rest of Britain finally following in Scotland’s footsteps and choosing to give LGBT people the same rights as everyone else.”

The Scottish Government are expected to launch their draft Marriage and Civil Partnerships Bill shortly, alongside a consultation on its implementation.

Over two-thirds of MSPs have signed the Equality Network’s ‘Equal Marriage Pledge’ committing themselves to voting in favour of the bill. Signatories include First Minister Alex Salmond and the leaders of all four opposition parties. Whilst 88 MSPs have now said they will vote in favour, just 10 are opposed.

The broad cross-party support for same-sex marriage at Holyrood is in sharp contrast to the political situation at Westminster, where over 100 Conservative MPs have indicated they intend to vote against the move.

Opinion polls have shown consistent public support for same-sex marriage in Scotland. The most recent poll was conducted in June by Ipsos MORI on behalf of the Equality Network. It showed record support with 64% of Scots in favour of a change in the law, and just 26% opposed. Separate polls conducted over the past two years by Populus, YouGov, Angus Reid, and the Scottish Social Attitudes Survey, have all shown similar levels of support.

Although the UK’s main churches oppose the reform, faiths, including the Quakers, Unitarians and liberal Judaism, support marriage rights for gay couples and have indicated they would be happy to conduct the ceremonies in their places of worship.

Most of our close European neighbours already have same-sex marriage, including Iceland, Norway, Sweden, the Netherlands, Denmark, Belgium, Spain and Portugal.

The French Government have pledged to bring forward legislation soon.

Ironically the new legislation will give lesbian and gay couples more equality than heterosexual couples.

Presently opposite sex couples cannot enter into a civil partnership and David Cameron intends that it will stay that way. This means that gay couples will have more rights than heterosexual couples under the new legislation.