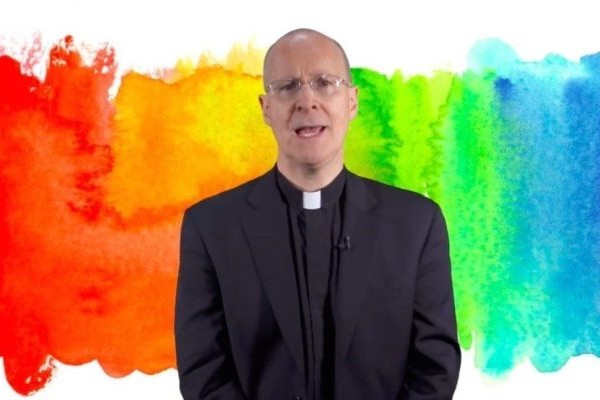 American Jesuit priest James Martin has faced criticism from far-right Catholics after explaining why the Virgin Mary is ‘for everyone’, including LGBTQ+ people, in response to the arrest of three LGBTQ+ activists in Poland.  Elzbieta Podlesna, Anna Prus and Joanna Gzyra-Iskandar recently went on trial after joining a peaceful protest in 2019 where attendees criticised the Catholic Church’s treatment of LGBTQ+ people. During the protests, the three displayed images of the Virgin Mary with a rainbow halo, and were subsequently arrested for ‘offending religious sentiment’.

Martin, who is known for his pro-LGBTQ+ stance, defended the activists on Twitter, and said the Virgin Mary is important to marginalised communities: “In Poland, where homophobia is rampant, LGBTQ+ people are on trial for “desecrating” a copy of the Black Madonna. But Mary is for everyone, including LGBTQ+ people, and there is a long history of portraying her as part of different faith communities. She is especially important to communities that have been persecuted or marginalised.”

He gave examples of how the image of Mary has been adapted by different cultures and countries, and argued the LGBTQ+ community should be able to do the same, saying: “[Considering Mary’s importance to marginalised groups] is not surprising that they would add their own symbol, the rainbow, in a respectful way, to a beloved image of their mother.” However, following Martin’s tweet, he faced backlash from anti-LGBTQ+ Catholics, with religious news site, LifeSiteNews, starting a petition which calls for the Jesuit Order to discipline Martin.

The petition, which has accumulated 20,000 signatures, states: “When James Martin, SJ, promoted an image on Twitter of the Blessed Virgin and Our Lord with sodomite rainbow-halos around their heads, he deeply offended Polish religion, history, culture and tradition.”