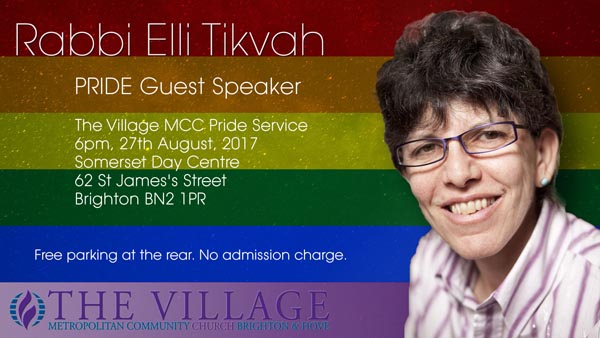 In the last of their PROUD VOICES series for Pride 2017, The Village Metropolitan Community Church (MCC) will welcome Rabbi Elli Tikvah to their pulpit on Sunday August 27 at 6pm.

Rabbi Elizabeth Tikvah Sarah of the Brighton & Hove Progressive Synagogue describes themselves as a Trouble Making Feminist Lesbian Gender-Queer Rabbi. The first ordained lesbian Rabbi to lead a mainstream synagogue in Britain, Elli has quite a story to tell about claiming a place in the world, with pride.

She has been a pioneer in the area of lesbian and gay inclusion, initiating a process within Liberal Judaism, which culminated in a new policy on lesbian and gay individuals and relationships in 2002, and the creation of an anthology of ceremonies, which was published by Liberal Judaism to coincide with the UK Civil Partnership law which came into force in December 2005.

Subsequently, in March 2006, she married her partner, Jess Wood (founder and Director of Allsorts, a project that works with LGBT young people in Brighton) at her synagogue, Brighton and Hove Progressive.

The Village MCC Brighton and Hove is a church that was created by LGBTQ Christians, their families, friends, and allies. It’s an MCC (Metropolitan Community Church) called to support the LGBTQ communities in whatever ways it can.

Brighton has huge LGBT+ communities, one of the largest in Europe. The Village MCC Brighton and Hove offers a safe space where anyone can feel at home, fully affirmed in their sexuality and gender identity.

Church members are active in the wider communities, offering emergency aid and support to the homeless and vulnerably housed. Their minister, Rev. Michael Hydes, offers spiritual direction and pastoral care. They worship together every Sunday evening at 6 pm.