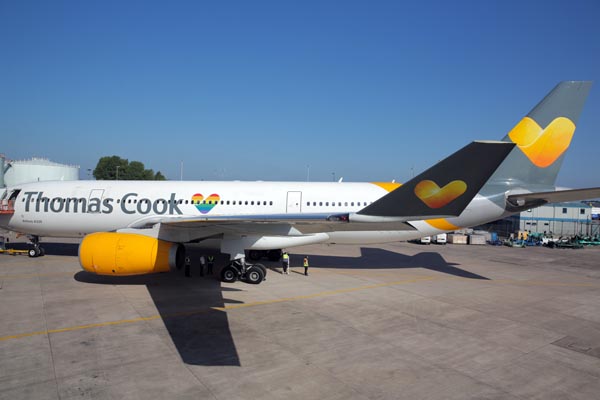 THOMAS Cook Airlines shows support for Manchester Pride from 35,000 feet in the air by emblazoning one of its long-haul aircraft with a special rainbow edition of the airline’s heart logo.

The A330 carrier embarked on its first journey with the colourful logo on June 7, taking Thomas Cook customers to destinations such as San Francisco and New York from Manchester Airport.

The airline first adorned one of its carriers with this symbol of its commitment to and support for LGBT+ people in 2017 in celebration of its sponsorship of the charity’s The Big Weekend event.

This year the airline has gone further by including the heart on one of their largest long-haul planes to honour their continued status as headline sponsor for The Big Weekend, which forms part of the Manchester Pride Festival which takes place on August bank holiday weekend, for the fourth year in a row.

Mark Fletcher, CEO of Manchester Pride, said: “Once again, we’re thrilled to see the LGBT+ logo take to the skies in such a unique fashion. We’ve been so lucky to be able to work with Thomas Cook Airlines on this exciting project for the second time and it’s just one of the many ways we can all help spread the message and show support for LGBT+ people across the world.”

Paul Hutchings, Managing Director for Thomas Cook Airlines, added: “Having received such a positive response from our customers to the rainbow version of our sunny heart logo last year, we couldn’t wait to top it in 2018 by featuring it once again – this time on an even larger aircraft. By branding one of our long-haul planes means our flying ambassadors and our support for the LGBT+ community will be seen internationally.”

Every year tens of thousands of people from across the UK and Europe flock to Manchester’s world-renowned Gay Village for the event and to watch the parade.

Timelapse video of the new logo being attached to the aircraft:

Thomas Cook Airlines is also supporting Manchester Pride’s upcoming international outreach campaign as the charity works with Marketing Manchester to partner with Boston and San Francisco Pride.  The activity, which wouldn’t be possible without the donation of flights from Thomas Cook Airlines, is designed to promote Manchester at these key pride events as a thriving hub of LGBT+ culture. The rainbow heart plane is likely to appear on the schedule to these two cities this summer.

Manchester Pride campaigns for the advancement of LGBT+ equality; celebrating LGBT+ lives and creating opportunities that engage LGBT+ people so that they can thrive. Since 2003, Manchester Pride has raised and distributed over £1.5million to local LGBT organisations.

Manchester Pride Festival takes place over August bank holiday weekend (August 24-27). With its roots in the heart of Manchester’s world famous Gay Village, the festival is made up of The Big Weekend, The Manchester Pride Parade on the afternoon of Saturday August 25, the alcohol free space that is The Superbia Weekend and the culmination of the festival, The Candlelit Vigil in Sackville Gardens on August 27, when The Gay Village is turned into a sea of flickering candles as visitors take a minute to remember those lost to the HIV virus and join together to fight the epidemic worldwide and the stigma that still exists.

For more information and to purchase tickets online, click here: