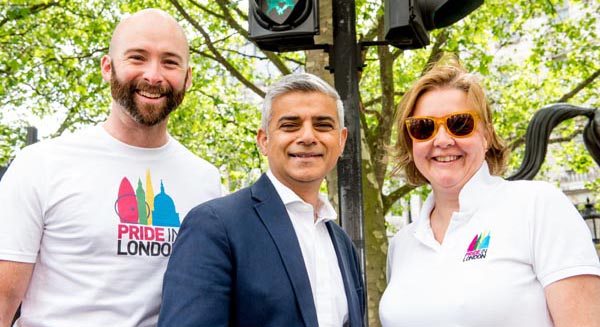 LGBT+ Pride in London announces changes to the Board and appoints first co-chair.

Alison Camps, the organisation’s Director of Marketing, will join Michael Salter-Church in the newly created role of Co-Chair of Pride in London.

The appointment follows the departure of the Deputy Chair Stephen Ward, who was a founder member of the Board, and helped build the current organisation.

The creation of a ‘Co-Chair’, rather than having a ‘Deputy Chair’, is part of the organisation’s concerted effort to improve diversity at all levels.

Alison was behind the very successful campaigns which appeared all over the country, including the award winning #NoFilter campaign, and ‘Pride Heroes’ featuring London’s LGBT+ community and allies.

All Board members offer their time voluntarily, and Pride in London continues to be one of the only major Pride’s worldwide run entirely by volunteers.

Alison who is a Partner and Deputy Chair at the market research agency Quadrangle, said: “It’s an honour – as a member of the LGBT+ community and a woman – to take up this post for a movement which continues to have a profound importance in people’s lives. Equality is a cause close to my heart, and I am committed to ensuring that we do all we can to promote and further the interests of the full spectrum of diverse groups in London’s wonderful LGBT+ community.

“I am proud to have played a part in making Pride in London a success these past four years and I’d like to thank my Board colleagues for their vote of confidence in me.

“We need Pride as much as we ever have done, and as we make plans for our biggest and best ever event, we have to remember that there remains a lot at stake, and still much work to be done to achieve the true equality, respect and recognition we all of us deserve.”

Michael Salter-Church, added: “It is important that Pride represents our entire community – and is seen to do so.  This year we are making a significant change to the Board, a  a specific move to improve diversity at the top of Pride.  I am delighted that Alison has agreed to serve alongside me as the Co-Chair, she brings great experience to the role.  Given we are all volunteers, this new role will also aide with the delivery of London’s third biggest annual one day event.

“On behalf of the Board, I also want to say an enormous thank you to Stephen Ward who has just stood down from the team.  Stephen was there at the birth of Pride in London, he organised the very first open meeting for representatives of LGBT+ groups across London at the Law Society.  He then led on communications and was critical to the development of the event.  He provided calm and wise counsel and helped us survive and thrive.  He deserves to be recognised by everyone who cares about Pride for the hard work and long hours he put in. We owe him a great debt of gratitude, and wish him well on his future plans.”

Pride in London has also recently announced the departure of the Operations Director, Rob Anderson. Rob played a crucial role ensuring that Pride activity, most importantly the Parade itself, took place safely and with record numbers involved.  He also oversaw the production of the Pride stages and Picnic in the Park.

Alison will continue as Director of Marketing, and recruitment for a new role of Director of Volunteers and a new Director of Operations is currently underway.