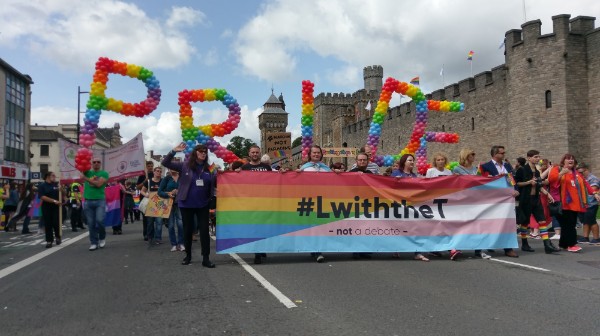 This was the 19th annual Pride Cymru event in Cardiff and this year’s event was bigger than ever. With 50,000 people attended the city’s main day of the three day ‘Big Weekend’ festival and record numbers pouring into the city all  weekend.

More than 10,000 people took part in the mile long parade with the sun shining, happy crowds watching it lined the main streets of the city centre; St Mary’s Street had been hung with huge Welsh flags and rainbow flags and looked stunning in the bright warm sunshine. Cardiff Castle, right in the city centre had rainbow ramparts and trans towers huge with dozens of flags which fluttered in the light breeze, it’s walls bathed in rainbow lights at night and looked fantastic, eyes up press team @ Royal Pavilion you’re missing a rainbow trick….

Pride Cymru’s theme for this year’s Big Weekend was #ProudToBeMe, a campaign aimed at all of the LGBT+ community and beyond urging to use our voices to promote equality and be proud of our diverse identities.

The march was led by campaigning group #LwiththeT showing that Wales capital city was no place for intolerance or prejudice aimed at or from within the LGBTQ+ community, the group was greeted by huge cheers as they made their way around the city centre followed by the vibrant, colourful and inclusive march.   The emergency response services followed them, all four services having a rainbow liveried turnout,  a huge NHS contingent celebrating 70 years of the NHS which was started by  Welsh Labour politician Aneurin Bevan.  With a big turn out from the unions, students groups, Wales LGBTQ+ community sector and charities, a superbly colourful chapter of sisters from The Order of Perpetual Indulgence Cardiff Mission and all the local bars giving good fierce Pride floats the parade engaged, entertained and educated the big crowds watching.  Mr Leather Wales had his own pack of pups and Leatherman along, and there was good support from the big employers in Cardiff, including Admiral Insurance, Principality and major charities and supermarkets.

Cardiff pride is clearly as much about making a political point as parading our diversity, with a lot of the bigger groups promoting full inclusivity and the smaller groups with hand make signs challenging bigotry. It was clear from the parade that the Welsh people hold little patience for the rise of anti-trans bigotry with plenty of people holding signs calling it out, shaming the perpetrators and affirming a solidarity with the Welsh Trans and Non-Binary communities.

Cardiff Pride is always fun, and with its unique mixture of glamourous drag queens, huge rugby players, stunning vocally harmonic choirs, Sisters of Indulgence and other cross community activism it’s a superb Pride parade. The parade ended up at the Cardiff City Lawns outside City Hall taken over for the ‘Big Weekend’ – a three day festival of LGBT+ entertainment with stages, international acts and a huge community village smack in the middle of the action. The army were out in force along with international welsh rugby players from the Welsh Rugby Union. A well thought out and fully accessible event, completely sold out for the Saturday. Crowds poured into the event with huge queues of patient tipsy Welsh folk waiting to attend the event, even late into the evening, aiming to make the most of the superb weather.   Derrick Barry headlined the event on the Saturday with the build-up throughout the evening charging the happy atmosphere to an thrilling electric spark!

At one point the whole crowd at the main stage were singing full blast along with London based drag performer and equality activist  ‘Son of a Tutu’ who rocked the crowd, all of us joined in song dance and attitude it was a fabulous moment of communities coming  & singing together to share their love.  The crowd continued to be up for anything and the evening continued well into the night with a huge street party and all the bars thronged to capacity. Cardiff knows how to party.

Cardiff certainly rolls the carpet out for the Pride weekend and this showed with the large numbers of visitors brought to the city, full hotels, bars thronged and plenty of happy faces.

The rain returned for Sunday with a vengeance but in Wales it’s not unusual to get damp once in a while, ponchos, umbrellas and the wind damaging the main stage did little to dampen the spirits of the crowd and when the weather cleared the Sunday event resumed, slightly pared down but with a lot salvaged considering the seriously heavy rain that had made the main stage unsafe to use.

The Big Weekend and Pride weekend was brought to an end Sunday evening with the utterly delectable Courtney Act who did a superb set, in a stunning diaphanous outfit, raising the roof with the excited crowd who once again joined in full raised voices to sing along.  Courtney did a wonderful version of Winehouse’s Valery, which has been changed to Miss Vanjie, the crowd roared back, we all laughed, Courtney spoke some welsh, they roared again.  Courtney is a real crowd pleaser, a superb singer, and a full octane performer.

All the city bars once again were thronged, it being a bank holiday weekend, all with quality drag and singing acts on until late into the night. We toured them all and were impressed by the friendly, fun and fierce LGBTQ+ peoples of Cardiff and the wonderful warm welsh welcome they’d kept for us.

Thank you for all your hard work Pride Cymru (Cardiff-Wales LGBT Mardi Gras) the charity behind the parade and events across the city.

Thanks Cardiff! You made us PROUD!