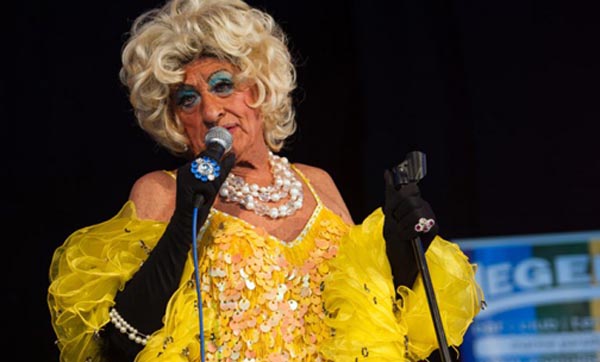 Gorgeous, glamorous and, if you are lucky, dragging a sparkling hostess trolley behind her. Lola gives gives an exclusive taster of the line-up for the UK’s favourite Pride Cabaret Tent.

“Once again, I’ve assembled the best of the LGBT cabaret scene to take centre stage on Saturday, August 6. Brighton Pride has changed over the years, especially since its rejuvenation in 2012, but the Legends Cabaret Big Top has always been one of the highlights of the day and this year is no exception.

“We have the absolute cream of Brighton performing in the form of Sally Vate, Davina Sparkle and taking their usual slot, slap bang in the middle of the afternoon, the irrepressible Miss Jason and the legendary Maisie Trollette! Staying with Brighton, we also have the powerhouse vocals of Gabriella Parrish and Jennie Castell.

“Drag Idol is an annual fixture on the cabaret scene these days and each year the winners have been very different in style, but all oozing with talent, so I’m thrilled that we have some of those winners coming to Brighton with their heels and bucket and spades! They are Queen of the battered sausage, Baga Chipz, along with Son Ofa Tutu and Martha D’Arthur, both of whom are making their Pride debuts.

“Of course, Brighton loves their drag queen to have an acid tongue and a show tune or six in their handbags, so firm favourites Mrs Moore, Kara Van Park, Cassidy Connors and Miss Penny will be giving us plenty of diva throughout the day.

“Now as you know, I’ve been at this game for a long time and so have our next two ladies, set to sit backstage like the Golden Girls. When I tell you that those ladies are Sandra and Rose Garden, I’m obviously Dorothy as the two of them could give Blanche a run for her money with their sexual appetites!

“And finally two ladies who have taken Brighton Pride and the cabaret scene by storm. Mary Mac will be bringing her infamous ‘Mary Mac dance’ along with gorgeous vocals and cheeky Scottish humour, whilst La Voix will be backed by her sexy Va Va Voom boys and giving us the ultimate showgirl that took her to the semi finals of Britain’s Got Talent.

“I hope you’ll agree we have the makings of one hell of a party on Saturday 6th August 6 at Preston Park. And of course like every good party there’ll be a couple of surprises along the way.

“If you haven’t gotten your tickets to one of the best Pride events in the UK, then why not? Book now. Come along and join in the party.”

“Brighton Pride raises awareness, celebrates diversity and equality and now gives over monies to The Rainbow Fund through ring-fenced money from the ticket sales. Which is why Legends is the perfect sponsor of the Legends Cabaret Big Top. Tony Chapman and his staff have gone above and beyond with all that they do for Brighton this year and over the last 20 and beyond. A great example of the community coming together and that makes me proud on its own.”

So roll up, roll up, to the greatest show on Earth. Well, the South Coast at least. It’s the Legends Cabaret Big Top at Brighton Pride!

To book tickets for the Brighton Pride Festival, on Saturday, August 6, 2016, click here: