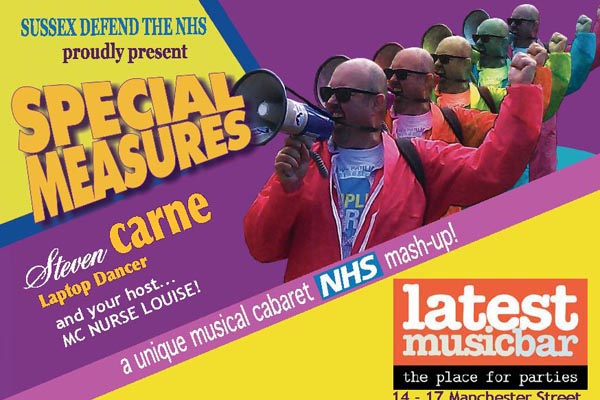 FOR those who can’t make that event Steve will also be doing two shorter shows at the Ale Smoke House, Poets’ Corner on Saturday June 22 at 7 and 8 30pm.

It’s not every cabaret that weaves darkly funny stories, songs from Aretha Franklin and Englebert Humperdink plus entertaining insights into Government, politicians and media schenanigans.

The show combines biting, sometimes surreal humour, with spot-on insights about how our NHS is being slashed, privatised, dismantled and handed over to US corporations.

For over a year now Steve has been taking the hit show to pubs, clubs and theatres around the country.

Steve a former West End performer said: “No one wakes up one morning and decides to become an NHS campaigner. Once you begin to see what is going on you can’t stop yourself. And that’s what the show is about – my amazing experience over the last five years working with some of the loveliest people and fighting some of the worst!”

The show, hosted by Sussex Defend the NHS with special guest MC, Nurse Louise, is the latest of many events and marches organised as part of the eight year campaign to save the NHS in Brighton and Hove and across East Sussex.

The Sussex Defend the NHS new updated exhibition – It’s a matter of life and death will be launched at the show.

Doors open at 7pm for viewing before the show starts.

Sussex NHS Defenders – Madeleine Dickens and Al Ferguson representing all those
who have helped organise the event said: “These events couldn’t be more timely. Many US corporations already have substantial footholds in our NHS. Trump’s recent visit and US-side statements about trade deals have added further fuel to the fire of speculation about the fate of our NHS. We are talking no less than the mutation of our universal, publicly–owned and
run, free at the point of access National Health Service into an imitation of the worst healthcare system in the world.