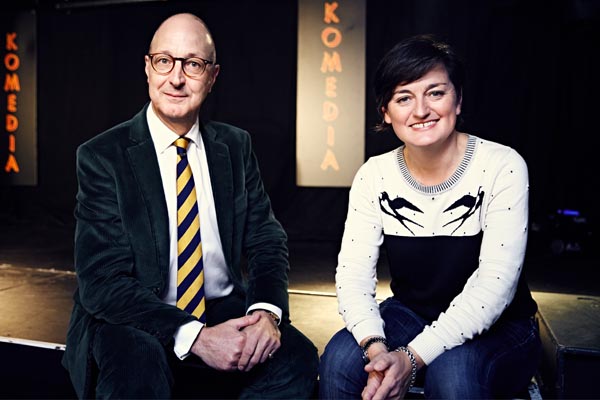 Broadcaster Simon Fanshawe traces the history of the gay community in Brighton over half a century in Brighton: 50 Years of Gay on BBC One South and South East on Monday July 31 at 7pm.

To mark the 50th Anniversary of the Sexual Offences Act and the subsequent decriminalisation of homosexuality, Broadcaster and Gay Rights campaigner Simon Fanshawe charts the turbulent story of Brighton’s gay people over the last five decades – in Brighton: 50 Years of Gay.

Made by Brighton-based production company Factory Films, the 30-minute documentary highlights the major historical developments that have impacted on gay people, not only in Brighton, but across the UK, taking in 1957’s influential Wolfenden Report, the devastating emergence of HIV and AIDS, the controversial Section 28 law of 1988, the emergence of the PRIDE movement and the legalisation of same-sex marriage in 2014.

Featuring revealing new interviews with prominent figures from Brighton’s gay scene including comedian Zoe Lyons, broadcaster Melita Dennett and activist Simon Watney, the film explores what it has meant to be gay over 50 years of legal change and shifting societal attitudes and highlights the ongoing struggle of Brighton’s gay community in its fight for tolerance and acceptance.

In the film, Simon Fanshawe meets author Colin Spence, 94-year-old Gay rights campaigner, George Montague and actor Johnny Worthy who recall how they were stigmatized and harassed by members of the public and the police in the 60s and 70s;

Author and co-editor of Queer in Brighton Maria Jastrzębska reveals the plight of the lesbian community and the refusal of the law to even acknowledge its existence;

Brighton resident, Allan Dover talks movingly of how his diagnosis as HIV positive felt like a death sentence back in the 1980s; and

Comic, Zoe Lyons describes how increased visibility on television and in the media in the 1990s finally gave the gay community something on-screen they could relate to.

Modern historian Lucy Robinson from the University of Sussex outlines the wider political and historical context.

Simon says: “Meeting those from the South East who were leading voices in the early gay movement, I was bowled over by their modesty, their urgency at the time and their resilience.  It was just not easy to lose your job, your health and be vilified to fight for your and other’s freedom.  They moved and inspired me.”

“It was inspiring to hear the stories of Brighton locals who’d been involved in the fight for gay rights over the last 50 years,” says Julie Heathcote, Factory Films. “Their stories were varied but they all spoke of their love of a liberal city that had ultimately embraced their sexuality and let them be themselves – often for the first time in their lives.”

Brighton: 50 Years of Gay is made by Factory Films for BBC South and BBC South East.  It will be broadcast on Monday, July 31 at 7pm.