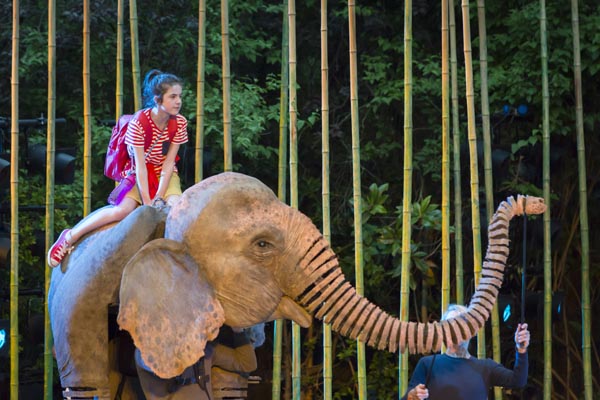 Presented by The Children’s Touring Partnership, Michael Morpurgo’s novel, based on a true story and adapted for the stage by Samuel Adamson, is brought to life in this award-winning production, complete with spectacular life-size puppets.

Originated by Chichester Festival Youth Theatre at Cass Sculpture Foundation in 2015, where it won the UK Theatre Award for Best Show for Children and Young People, this epic production tells an emotional and moving story of love, loss and loyalty and of living for the moment.

For Lilly, an Indonesian holiday with mum is a new start and the chance to ride an elephant called Oona. But then the tsunami hits and Oona charges deep into the jungle, her young rider desperately clinging on. At first there’s wonder, discovery and tree-top adventures with the orangutans but, as thoughts turn to mum left behind, tigers prowl, hunger hits, and Lilly must now learn to survive the rainforest. Then come the hunters…

Michael Morpurgo, the former children’s laureate and author of War Horse, was inspired by the real-life story of Amber Owen, who was on holiday in Phuket with her mother and stepfather in 2004, when she went on an elephant ride.

While riding Ning Nong along the beach, the eight-year-old noticed the elephant was attempting to pull away from the receding sea water. “He ran away and, as the water came in, I was safely on his back. He saved my life.”

When he read Amber’s story in the newspaper, Michael Morpurgo said it was the one bit of hope amid the destruction of the Boxing Day tsunami which hit South East Asia. The production will work to support the Born Free Foundation’s global elephant conservation projects.

Time: Evenings at 7pm, matinees at 2pm (Saturday February 18 at 2pm only)