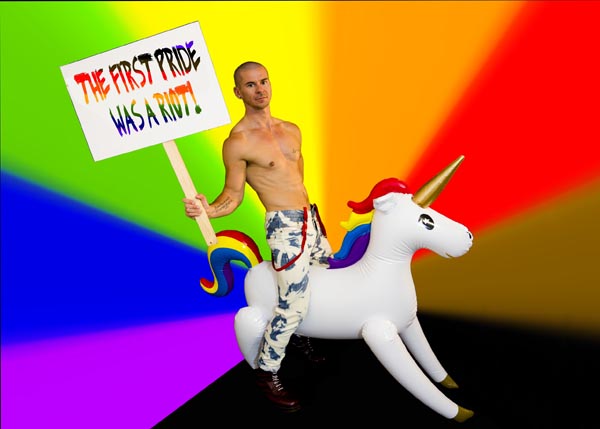 It’s going to be a Riot! At SEAS – Socially Engaged Art Salon, an exhibition for Brighton & Hove Pride.

Yes, there is partying, drinking, shopping and fucking but Pride initially is about protest.

And this is what will be exhibited at Riot! at SEAS – Socially Engaged Art Salon, where the biggest Brighton exhibition will take place.

The exhibition will include a queer fantasy fairyland, outrageous performances, explicit artworks, queer propaganda, short films and workshops you wouldn’t like to take your mama to.

To celebrate the anniversary of the Stonewall riots in 1969, the exhibition will place emphasis on the experience and representations of LGBT+ of colour, trans and non-binary people.

On the opening Friday evening, August 2, visitors will be transported back to the underground world of 1980s ball culture, New York, recently depicted by in the TV series, Pose.

The Artist Harold Offeh, whose work has been exhibited widely in the UK and internationally including at Tate Britain and Modern, and Studio Museum Harlem, will deliver a quick lesson in how to “Snap it like a diva” – a must if you are parading the day after.

Between reality and fantasy, the artists Keops Guerrero and Edu Stambolsky will present their multi-media contemporary dance performance “Where mermaids are born”, which deals with the mythological roots and present reality of non-binary and trans persons, and the artist Roey Victoria Heifetz will give a talk and show her film about her experience of transitioning in mid-life.

The film is currently exhibiting at the Venice Art Biennale. The evening will end with a provocative drag performance by the legendary Son of a Tutu who recently appeared in a BBC program, Nigeria is as gay as any other country.  Expect songs about Trump, refugees, Teresa May, the Home Office Windrush scandal and the beloved Nina Simone.

The second event will take place on the afternoon of Saturday, August 10 and includes a series of creative workshops by Alanna Black and All Sorts, Anthony Steven and Gil Mualem-Doron. Expect live drawings, fanzine making, and a free photo shoot in forbidden places (yes you will be able to use those photos on Grindr and Her).

Visitors to the event will also be invited to leave their mark on the Wall of Shame – a large wall covered by the flags of the 70+ countries in which LGBT+ people are still criminalised.

Dr Gil Mualem-Doron, SEAS’s creative director, stresses that “Riot! is one of the only exhibitions in the UK where mixing strong political and social works by local and international artists with a more celebratory and fantasy style works.  Concerning Stonewall’s anniversary and SEAS’ commitment to diversity, they have chosen artists and works that you are not likely to see in commercial or mainstream galleries. Expect to cry, laugh, be aroused and dazed”.

The exhibition will be open for a month and the work will include about 30 artists from Brighton, the UK and further afield will be spread over the two floors of the BMECP Centre,  SEAS studio basement will be transformed by Vanessa Maurice-Williams into a magical fairyland.

Another section of the exhibition will include a mini solo show by the Instagram sensation Queer Habibi – an anonymous Middle Eastern artist who create cheeky illustrations of  LGBT+ people’s daily life in cities across the Arab world, like Cairo, Amman, Ramallah. Another section will feature the mix media work of Brighton based artist Josef Cabey depicting his experience as a black gay in Brighton.

The hub area will include a series of intimate and captivating short films about the lives of transgender persons and LGBT+ people of colour in the UK and the Commonwealth by  Fox Fisher, Sussex University PhD candidate Fubara-Manuel, and Brighton Uni. Graduate Pacheanne Anderson. Gil Mualem-Doron will exhibit his on-going participatory photography project No Man’s Land from which the exhibition’s poster was created.