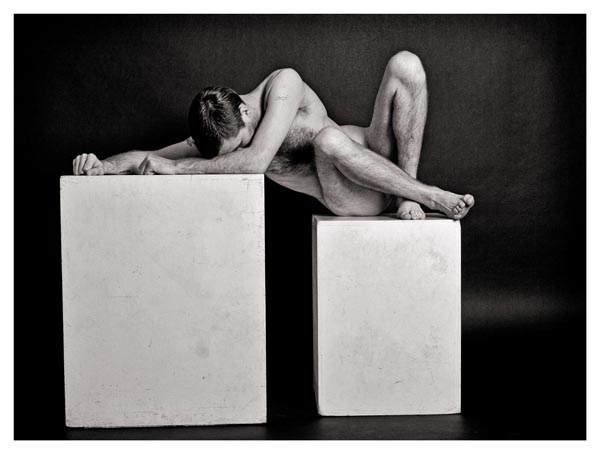 Ted Cotter spent his working life in financial services in the City of London.

A HIGH-level hockey player in his spare time, he turned to photography relatively late in life, joining the world’s oldest photographic society The Camera Club in London in 1990. He subsequently became its Secretary, Treasurer and then its President.

At the Camera Club he created a group to study and photograph the male nude form, running it for fifteen years. “Male nudes were frowned upon, but we said “we’re here, deal with us .”

The first male nude exhibition at the Camera Club rattled a few cages, he says, but was the most successful opening the club had had.

Over the intervening 30 years Ted has built up a group of models who pose for him at intervals – some yearly and some more ambitiously every decade. His ‘continuity’ project charts the men’s maturing and ageing and is an ongoing piece of work, of which he is duly proud. And the models have often become good friends, feeling totally at ease with the work.

So what makes a good subject for Ted ? “The guys need muscle tone, so I can mould them into abstract shapes but they mustn’t be muscle Marys, and they have to bring personality to the shoot.” He particularly likes working with dancers. “They have great control of their bodies, physical strength but also an inner strength of character.”

Ted has three main projects – the chronology work over many years with the same men; a thematic series with men posed round ropes, and a new idea for male and female pictures, probably including the woman in various stages of pregnancy and including the new child when born.

All his photography is black and white. “Colour in a photo of the human form is distracting ; there is much more tolerance in the developing of a monochrome print and it adds to the sculptural effect I aim for.”

As with all highly professional photographers, much of his work is discarded along the way. Typically a three-hour shoot will produce 5 or 6 exhibition-quality photos.

Still based in studios at the Camera Club in Kennington, London Ted admits: “My best photos have often been mistakes. I tell the subject not to move but then they do and create a better shape.”

“The most important element of the work is total trust between subject and photographer.” This clearly only comes with time, but when you photograph the same people for over 30 years, time is clearly on Ted Cotter’s side.

Ted Cotter hopes to mount this current exhibition in Brighton in 2019.

You can view more of his work on Tumblr at towncrierphotos.

For enquiries to buy his work, email:  towncrierphotos@gmail.com

Hombres is presently showing at the Casablanca cocktail bar and art venue in Sitges until October 14.