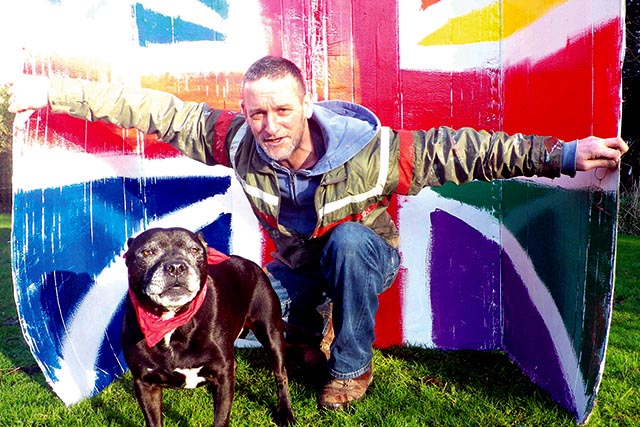 Artist and activist, Vince Laws, has produced a series of shrouds, eight of which will be on display at Battersea Arts Centre as part of the Rest & Resilience Festival, till March 16.

THE DWP Deaths Make Me Sick shrouds describe the circumstances of death of named people dealing with the DWP including:

♦ Elenore Tatton – Died just weeks after the Government found her ‘fit for work’.

The DWP’s response to concerns about death rates was to stop publishing them. (Source Mo Stewart Welfare Weekly 2018)

The DWP Deaths Make Me Sick shrouds were the backdrop to a live performance art piece called A Very Queer Nazi Faust put on by Vince Laws and 13 Norfolk based disability rights activists at Norwich Arts Centre in September 2018.

There is now a DWP Deaths Make Me Sick Facebook page. Images of all 22 shrouds made so far are on the page, with the text printed under them.

The shrouds will be displayed around the UK in 2019.

“I want to get them seen,” said Laws. “I feel the need to carry on screaming about the human rights abuses of this current Tory government. The shrouds are actually quite painful to make. I take breaks. They are very sad. But also very powerful because they are the truth.”

A Very Queer Nazi Faust was commissioned and supported by Unlimited, celebrating the work of disabled artists, with funding from Spirit of 2012. Funded by Norfolk County Council. Supported by Norwich Arts Centre.

If you want to dispay the Shrouds in your town or city, click here: