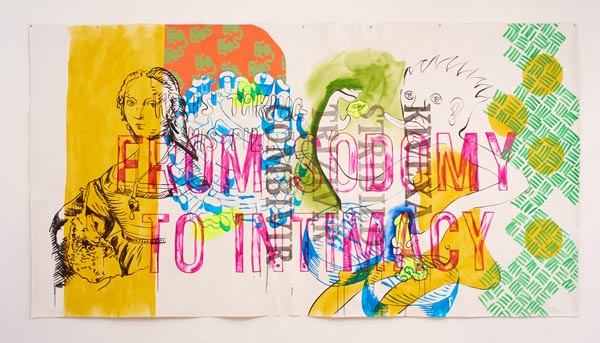 The exhibition runs from July 28 until November 5, 2017, with the opening marking 50 years since the partial decriminalisation of male homosexual act was passed in England and Wales (1967 Sexual Offences Act), on July 27 1967.

From David Hockney and Steve McQueen to Anya Gallaccio and Sarah Lucas, the artists represented have used their work to explore sexuality and gender identity since 1967, after the passing of the Act.

Coming Out will reveal the findings of more than two years of research by the Walker into LGBT+ history and visual culture, exploring works of art within the Arts Council Collection as well as its own collection.

Charlotte Keenan, Curator of British Art at National Museums Liverpool, said: “Coming Out will be one of the most important exhibitions in the Walker’s history. Showcasing the results of several years of research, it will make visible the themes of sexuality, gender identity and queerness that lie at the heart of some of Britain’s most significant contemporary works.

“The exhibition also forms part of an even greater ambition for us; to make queer British art and its importance to art history permanently visible within our galleries. Visitors can expect to see new interpretation within our permanent displays, as well as some exciting new acquisitions as we look to show – through our own collections – that LGBT+ history is everybody’s history.”

Works on display in Coming Out include feminist art by Margaret Harrison and iconic and provocative works by Linder and Sarah Lucas. Arresting photography by Zanele Muholi, Sunil Gupta, Maud Sulter and Wolfgang Tillmans feature, along with performances pieces and a number of audio-visual works by artists including Isaac Julien, Hilary Lloyd and James Richards.

Pauline Boudry and Renate Lorenz’s I Want (2015) is also included as a new acquisition through Art Fund’s New Collecting Award scheme. This film installation, featuring artist Sharon Hayes, is based on a script that plagiarises from the texts of punk poet Kathy Acker as well as the chats and addresses of whistle-blower Chelsea Manning.

A striking installation piece by Anya Gallaccio also features, titled Can Love Remember the Question and the Answer? (2003). The work comprises a pair of mahogany doors, each featuring a windowpane. Each time the installation is displayed, 60 gerbera flowers are inserted within the panes. During the run of the exhibition, the gerberas will begin to decompose.

Central to the exhibition will be a free programme of events and performances. Organised in partnership with artists, activists and communities, they will take place in FORUM; a designated room at the heart of the exhibition. The events are designed to encourage conversations around topics that have been ignored by institutions in the past, and to look towards the future.

Event highlights include a performance piece by Paul Maheke and ‘nail transphobia’ manicures by activist Charlie Craggs. While offering free manicures, Craggs will chat to visitors, encouraging them to ask questions relating to her experience as a trans woman, with the aim of addressing some common misconceptions.

Coming Out is a touring exhibition conceived by National Museums Liverpool, in partnership with Birmingham Museums Trust as part of the Arts Council Collection National Partners Programme 2016-19.

The show will travel to Birmingham Museum & Art Gallery in December 2017 where it will be re-presented within the major Gas Hall exhibition space. Works from Birmingham’s collection such as Francis Bacon, Grayson Perry and John Stezaker will be included as well as significant loans from other UK collections.