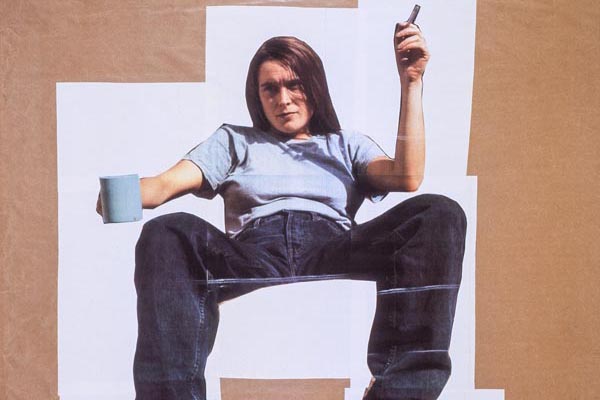 The exhibition aims to move the conversation on from the linear and binary ideas that have previously defined LGBT+ histories, instead considering sexuality and gender as non-binary concepts that include a spectrum of identities.

The selected works, the majority of which have been borrowed from the Arts Council Collection, aim to act as catalysts for the consideration and discussion of these subjects.

The exhibition was conceived by National Museums Liverpool, where it was on show at the Walker Art Gallery until November 5.

In Birmingham significant new loans will include sculptures by Sarah Lucas, prints by Margaret Harrison and photography by renowned Birmingham-based artist Vanley Burke.

These join paintings by David Hockney and Derek Jarman, photography by Sunil Gupta and Zanale Muholi and films by Steve McQueen, Isaac Julien and Charlotte Prodger.

Grayson Perry, Who Am I 1996 © the artist. Image by Birmingham Museums Trust

Two works by Turner-prize winning artist Grayson Perry will be presented together for the first time –  Claire’s Coming Out Dress (2000), and his ceramic pot Who Am I?(1996).

Both artworks provide an important insight into Grayson’s exploration of his own identity. From the coded symbols and personal dialogue in his ceramic pot of 1996, to the declaration of his transvestite public persona, Claire, in the intricately designed party dress from 2000, which he wore to mark his emergence as a transvestite to the art world. The addition of Grayson’s work ensures that the theme of gender expression in art and visual culture is prominently explored.

Further considerations of this theme include Chila Kumari Burman’s striking and colour saturated print ‘A Moment to Herself’ (2002) which questions society’s meaning of beauty through a vivid collection of images of beautifying objects, such as jewellery, make-up and lingerie found in her flat.

Coming Out continues with a strong representation of female artists, including seven works from Sarah Lucas’ iconic Self-Portrait Series (1990-98). These will be joined by two of Lucas’ satirical and striking sculptures, for which she is best known – Willy (2000), a sculpture of a plastic garden gnome covered in Marlboro Lights cigarettes and Nud Cycladic 7 (2010), an abstract and ambiguous combination of forms made using tan nylon tights which transcends gender. Lucas’ works explore her identity as a woman and sharply critique gendered stereotypes.

Other stand-out works include the film BRIDGIT (2016) by Charlotte Prodger who held her first solo museum exhibition in America this year. Shot on an iPhone, BRIDGIT, recently acquired by Arts Council Collection, is a narrated film by Prodger. In the film she shares her experiences of growing up, coming out and of her identity today.

The timely nature of this exhibition is powerfully explored in four photographs from Sunil Gupta’s series Exiles which illustrate the men he met at cruising sites in New Delhi in 1987. Gupta’s photographs have added poignancy today when the rights of LGBT+ communities in India have been threatened by 2017 Government legislation.

Gupta’s images join works by Birmingham-based photographer Vanley Burke, on display for the first time. These three photographic prints illustrate a Pride Demonstration in Wolverhampton in 1988 where protesters were challenging the Government’s now repealed Section 28 Act, which stated that a local authority should not intentionally promote homosexuality in publishing or teaching. Vanley’s documentation of this protest draws attention of LGBT+ histories in the West Midlands.

A gallery trail will accompany the exhibition and take visitors on an insightful journey of 25 artworks presented in nine of Birmingham’s fine art collection galleries. The trail will bring the show’s themes to life in new settings and raise awareness of the visibility of LGBT+ stories in museum collections.

Lisa Beauchamp, Curator of Modern and Contemporary Art Birmingham Museums Trust, said: “Coming Out marks a major moment for Birmingham Museum & Art Gallery as we highlight the importance of LGBT+ history on contemporary art, in this significant anniversary year.

“In devising Birmingham’s exhibition we have been fortunate enough to secure exciting new loans, which will make this a must-see exhibition for those who have already enjoyed Liverpool’s show and for those who will be completely new to it.”

Jill Constantine, Head of Arts Council Collection, added: “I’m delighted that this important show will travel to Birmingham and the new additions will further enrich the exhibition and allow us to see and celebrate the huge contribution to the visual arts made by the LGBTQ+ communities.”

Accompanying the exhibition will be an innovative learning and engagement programme facilitated by the Arts Council Collection National Partnership, in a dedicated space called FORUM. The events and activities have been developed by working in partnership with local artists and community groups.

The events and activities in FORUM aim to engender debate and discussion of topics which have previously been ignored by institutions in the past, and encourage people to have their say today.

The exhibition will launch on Saturday, December 2 with a free public event.

Partnering with SHOUT Festival of Queer Arts and Culture and Birmingham LGBT, Birmingham Museum & Art Gallery will host a series of specially commissioned performances and activities to celebrate the opening of the exhibition.

Coming Out is a touring exhibition conceived by National Museums Liverpool, in partnership with Birmingham Museums Trust as part of the Arts Council Collection National Partners Programme 2016 –19.