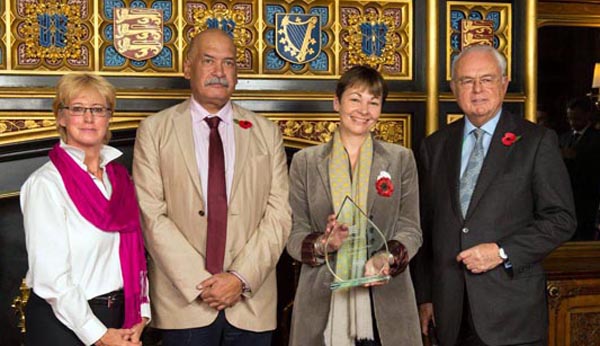 Mr Speaker, Rt Hon John Bercow MP, a Patron of the Patchwork Foundation announced the winners of the MP of the Year Awards, 2015 for those MPs who have represented and worked well with underrepresented, deprived and minority communities across the country at Speakers House on November 4, 2015.

Natalie Bennett, Green Party Leader, said: “Caroline’s award is richly deserved. Everyone in the Green Party is constantly inspired by Caroline’s outstanding work in the House of Commons to challenge the status quo and deliver real change for the common good.  This prestigious award recognises what all Greens know – that Caroline has done a huge amount of work for deprived, minority and under represented communities.

“Caroline has been a tireless defender of the most vulnerable and consistently provided real opposition to the government’s damaging and ideologically-driven austerity agenda and her outstanding track record in Westminster has not gone unnoticed by her Brighton Pavilion constituents, who returned her with a significantly increased majority in the May 2015 General Election.”

Caroline Lucas MP, added: “It’s a huge honour to receive this Patchwork Foundation Award. There is still plenty of work to do in tackling the chronic underrepresentation of deprived communities in politics. Our democracy and our politics are richer when a representative cross-section of society is reflected in the institutions of Government.  As the MP for Brighton Pavilion I am committed to continue helping people from all backgrounds to be part of the political process.”