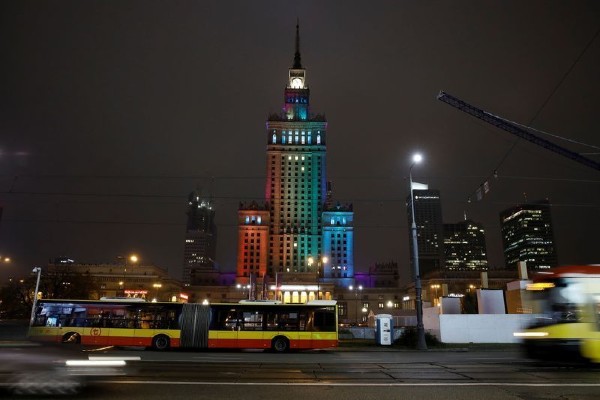 Multiple Polish cities, including the capital of Warsaw, illuminated major buildings with rainbow lights as a symbol of support for the country’s oppressed LGBTQ+ community. According to Reuters, Warsaw mayor, Rafal Trzaskowski, pledged to light up the city to mark the International Day for Tolerance on Monday November 16. The cities of Gdansk, Krakow, Poznan, Wroclaw also took part in the movement.

Despite the symbol of support, LGBTQ+ activists believe more action needs to be taken, particularly on Trzaskowski’s part. The Warsaw mayor promised to build a centre for homeless LGBTQ+ youth but has not yet done so. Hubert Sobecki – an activist from LGBTQ+ organisation Love Does Not Exclude – said: “We expect more from someone who…pledged to do something tangible for the community,” adding that there has been “no action” since Trzaskowski signed an LGBTQ+ charter two years ago.

Hostility towards LGBTQ+ Poles has grown considerably since the re-election of anti-LGBTQ+ president, Andrzej Duda, with now over 100 zones in the country declaring themselves ‘LGBTQ+ free’. Last week, the EU’s executive commission launched its first scheme to protect LGBTQ+ citizens in response to growing discrimination, including denying funding to government’s which do not promote tolerance and equality. Helena Dalli, the European commissioner for equality, said:  “Equality is the value of the EU, if you’re going against the value, then the EU should not fund you.”