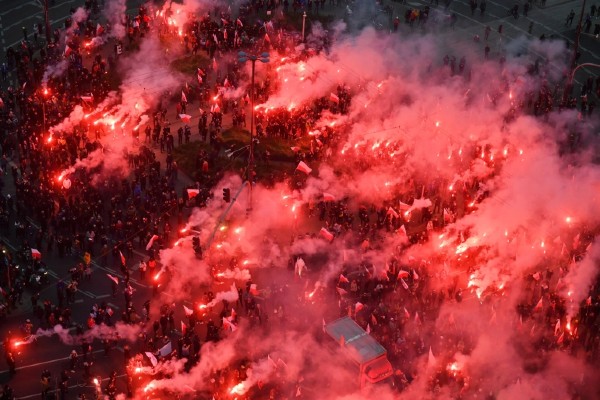 On Wednesday November 11, thousands joined an annual far-right anti-LGBTQ+ ‘independence march’ in Warsaw, Poland, which saw violence break out between protestors and the police. According to Al Jazeera, marchers ignored police warnings to disperse due to Covid-19 regulations, which led to police firing rubber bullets at the crowds, and protestors throwing rocks and firecracks. Police officials said: “Officers had to act decisively in order to clear a passage for ambulances and vehicles carrying respirators that were being blocked by hooligans,” and several officers were reportedly injured.

The march has taken place every November since 2008 after it was created by several far-right organisations. Officially it celebrates Poland’s independence from Russia, Prussia and the Austrian Empire in the 20th century but it has developed into a display of anti-LGBTQ+ and racist ideologies. Protestors were reportedly heard chanting ‘god, honour and homeland’ and seen carrying racist symbols and throwing firecrackers into apartment windows that displayed Pride flags.

Hostility towards the country’s LGBTQ+ community has grown since the re-election of anti-queer president, Andrzej Duda, in July. The country now has over 100 zones which have declared themselves ‘LGBTQ+ free’ and anti-LGBTQ+ MP, Przemyslaw Czarnek, was appointed as education minister in September. Around 350,000 signed a petition demanding the EU protect LGBTQ+ Poles, with head of the European Commission Ursula von der Leyen already condemning the Polish government’s attitudes towards the LGBTQ+ community. However, many queer Poles have already fled the country in fear.