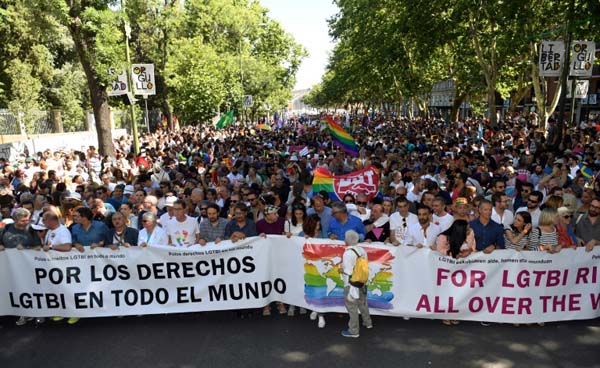 Madrid World Pride 2017 opened with a ceremony that took place in the Teatro Calderon and the streets around were packed full of expectant Spanish and visitors.

This is a city that takes Pride and an excuse for a party very seriously indeed. The weather was cooler than usual (which was lovely as it’s usually 40 degrees) and this edition of World Pride in Madrid commemorated 40 years since the first LGBT+ protests in Spain; 30 years since Chueca became the centre for the gay community and Pride; 20 years since the first Pride Parade that united political protest with celebration and 10 years since EuroPride was last celebrated in the city.

Moreover, Madrid is the first Spanish-speaking capital to celebrate WorldPride and WOW did they go for it

The climax of the WorldPride Festival took place on Saturday July 1, with a huge procession of activist groups, LGBT+ groups, political parties and supporters and followed up by the longest floats ever, 52 superb trucks stuffed with dancers crawled their way through the centre of Madrid, starting at Atocha Station and ending in Plaza de Colón where a main stage welcomed all the participants with music and the reading of the manifesto of freedom, inclusion and diversity. The parade took more than four hours to slowly roll by.

There was an alternative protest Pride a few days before as there has been criticism of the commercialisation of Spanish Prides in the last few years and the sponsorship showed, with occasional uninspired rainbow-wash over commercial products.

More than two million people attended the parade, Madrid Prides floats get bigger and bigger each year, seem to defy any health and safety rules and spewed foam, glitter, bubbles, smoke, kisses, condoms and a seriously hot amount of flirting on the huge happy crowds watching. It was slightly less chaotic than previous years but you can’t beat the sight of over a hundred speedo clad Latino muscle boys writhing, bumping and grinding while clinging on a four level scaffolder lorry with some seriously cool music being blasted out.

There were as many floats representing Lesbian clubs and bars, Trans associations, as there were men’s bars and representatives of bars/clubs and spaces where everyone was welcomed.

The entire city was rainbow-hued, draped, painted or lit up to celebrate both the local and visiting LGBT+ populations. All public spaces, all main buildings; including the Spanish Parliament symbolically rainbow lit all weekend (imagine that in the UK!), street crossings gays’d up, windows decorated across the city and rainbow flags everywhere.

It’s been a long time since I’ve been anywhere that felt so safe, beautiful and queer, everywhere you went there was huge crowds of LGBT’s and happy allies enjoying the kind of free open engaging and inclusive parties, stages, music events, arts, crafts and famous galleries all joining in.

From the Prado’s special homo exhibition to incredibly huge parties in fantastic clubs topping out with Fabrik’s mega parties of 7,000 revellers going at it all night – Madrid excelled this year.

Tubes ran all night, extra busses, streets scrubbed clean each morning; Madrid was in its groove. We were up till dawn, with half of the city dancing in squares, drinking, skipping, eating and meeting old (and new) friends across the city, night after night after night.

The Spanish know how to party and Madrid is an example of how a city committed both politically and culturally to being truly inclusive can provide such a superbly diverse collection of events culminating in a superb Pride Procession and reap the substantial rewards bestowed by us, the LGBT’s of the world when we are made to feel so very, very welcome and so very, very Proud.