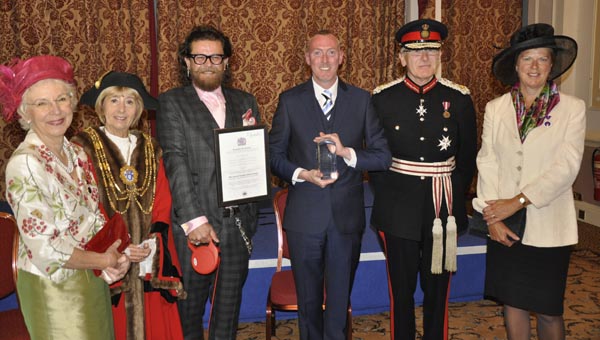 Lord Lieutenant of East Sussex Peter Field presents Danny Dwyer from Bear-Patrol with the Queens Golden Jubilee Award 2015 for voluntary service by groups in the community today at the Old Ship Hotel.

The Lord Lieutenant was joined by both Deputy Lieutenants of East Sussex, Mrs Caroline Nicholls and Mrs Margaret Bamford who had assessed the nomination for Bear-Patrol to receive the honour.

The citation from Queen Elizabeth II was read by Mrs Caroline Nicholls.

She said: “Elizabeth the Second by the Grace of God of the United Kingdom of Great Britain and Northern Ireland and of Our other Realms and Territories Queen, Defender of Faith, to Bear-Patrol, LGBT social group organising leisure, challenge and fundraising events helping to reduce isolation providing a network for the local community.

“We being cognisant of the said group’s outstanding voluntary work in the community, and being desirous of showing Our Royal Favour do hereby confer upon it The Queen’s Golden Jubilee Award for voluntary service by groups in the community 2015 for such period as the group continues to provide its current service and do hereby give permission for the authorised emblem of the said Award to be displayed on the group’s letterhead and other public material.

“Given at Our Court of St James’s under Our Royal Sign Manual this second day of June in the sixty-fourth year of Our Reign.”

The event was attended by The Mayor of Brighton & Hove, Councillor Linda Hydes and two former Mayors of the city Conservative Councillor Denise Cobb and Alderman of the City, former Labour Councillor Brian Fitch. Councillor Emma Daniel the Labour Chair of the Neighbourhood, Communities & Equalities Committee was also present representing the administration.

Alderman Fitch, said; “What a wonderful accolade not just for the LGBT Communities in Brighton and Hove, but something for everyone across the city to celebrate. Bear-Patrol do excellent work bringing people together to raise money for good causes and I know from personal experience gained during my year as Mayor how Danny Dwyer’s passion drives the organisation forward. Congratulations to everyone at Bear-Patrol and keep up the good work.”

Jason Sutton and Ant Howells introduced the Lord Lieutenant of East Sussex, Peter Field to the audience and spoke on behalf of Bear-Patrol, Tony Mould from My Brighton and Hove photographed the event, Ian Chaplin chaperoned the Lord Lieutenant of East Sussex, Graeme Atack chaperoned the Mayor and the Ship Hotel sponsored the event donating the maginficent Paganini Ballroom and refreshments.

Bear-Patrol join GEMS (Gay Elderly Mens Society) as the second LGBT organisation in Brighton and Hove to have received this unique honour from the Queen. Bear-Patrol started in late 2008 as a social networking group and did not commence their fundraising activities until 2010. From January 2011 to December 2014 they raised a staggering £88,847.26 mainly for the Sussex Beacon and at Easter this year they passed the magic £100,000 total, a magnificent achievement for a small community group, showing what can be done when people work together in the interests of the wider LGBT/HIV communities to achieve something special and realise their dreams.