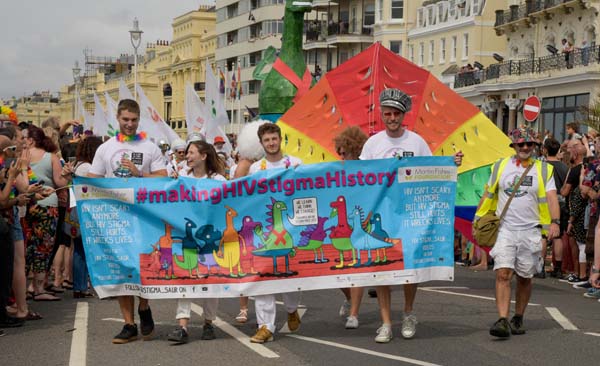 MARKING 50 years since the Stonewall uprising, it was another fantastic year of celebration, campaigning and reflection for Brighton & Hove Pride with charities and community groups from our combined LGBT+ communities making up two third of the parade entries alongside local businesses, the NHS and blue light services as well as partners and sponsors celebrating their LGBT+ employee networks.

This year’s campaign #We Stand Together, was a call to action for all in the LGBT+ communities and their allies to unite and stand together against all types of discrimination and to defend the advances in equality and inclusion over the last five decades, since Stonewall.

The LGBT+ Community Parade remains one of the highlights of the Brighton & Hove Pride Festival weekend and enjoyed record entries this year.

Charity partners The Brighton Rainbow Fund were at the head of the parade along with representatives from the #WeStandTogether campaign bringing awareness to the alarming increase in attacks on our communities and to defend the progress that has been fought for over the past five decades.

As one of the biggest and brightest events in Brighton & Hove’s events calendar, over 300,000 people poured onto the city’s streets to participate in and watch as the colourful carnival processed its way from the Hove Lawns to the Pride festival at Preston Park.

A spokesperson for Brighton & Hove Pride said: “We also like to express our thanks to the 300+ volunteers who gave their time and helped facilitate the safe delivery of the weekend events.”