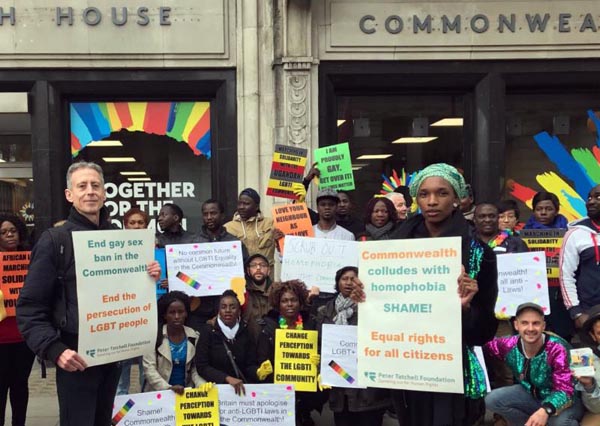 Following their successful campaign during the recent Commonwealth Head of Government (ChoGN) meeting in London to draw attention to the plight of LGBT+ people in Commonwealth States, The Peter Tatchell Foundation issues an appeal for donations to help continue the next stage of their work on the campaign.

THE Commonwealth of Nations is a voluntary association of 53 sovereign states, nearly all of them former British colonies or dependencies of those colonies, where homosexual activity remains a criminal offence in 35 of those 53 sovereign states and legal in only 18.

Key successes of the recent awareness raising campaign by The Peter Tatchell Foundation include:

♦ Gathering a 104,115 signatures petition urging decriminalisation and other LGBT+ demands, which was handed to the Commonwealth Assistant Secretary General during the ChoGN meeting.

♦ Helping persuade the Prime Minister Theresa May to “deeply regret” Britain’s imposition of anti-LGBT+ laws on colonised peoples in the nineteenth century, which helped highlight that many of the existing homophobic laws are not authentic, indigenous national legislation.

♦ Staging a vigil outside the Commonwealth HQ during the summit, attended by LGBT+ people from across the Commonwealth, which generated masses of media coverage and public awareness about anti-LGBT+ persecution in 80% of Commonwealth countries.

Peter Tatchell says: “The fight for LGBT+ rights in the Commonwealth goes on and we will continue to be at the forefront of it.

“We have an exciting new project in the planning which involves collaboration with partners in Commonwealth countries and requires substantial funding.

“Will you consider making a donation or creating a standing order to help fund our work?”